Temmie Ovwasa who was formerly signed to YBNL, has called out her former boss Olamide Adedeji days after hinting that their relationship had gone sour. 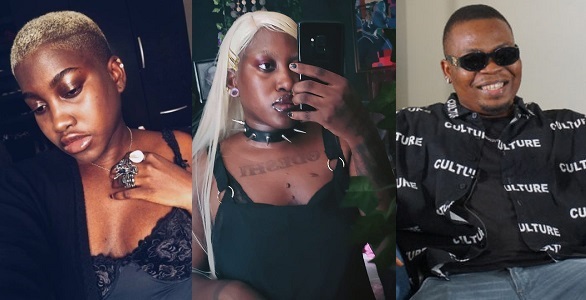 In tweets she shared, Temmie Ovwasa accused Olamide of giving her and other artistes hope and snatching it from them. She alleged that he “gives the world the impression that he’s kind but beneath the facade is a man that leaves a trail of broken dreams.”

The singer who further accused Olamide of rejecting all her shows, also alleged that the rapper brought her to Lagos from Ilorin and kept her in a house for almost 5 years without allowing her to drop anything for 3 years.

Nigerians:- “Temmie You have not dropped any song in 2 years, lazy m artist “

Temmie:- “I actually recorded 3 albums and multiple singles that were never dropped by YBNL for no fucking reason and my shows were rejected by them making it hard for me to do anything!”

Omo, it’s YBNL thinking that I’m going to keep quiet after they fucked be over for nearly 5 years, My voice may not be loud but I fit shout. You don’t give a person hope & snatch it from them. Olamide Adedeji, I will always have your name in my mouth. Silence is not my language

Chinko, Xino, Lyta, Davolee, Picasso, Yomi blaze, Limerick,Temmie. You give the world the impression that you’re kind but beneath the facade is a man that leaves a trail of broken dreams. But then again, that’s what men do. Your story will cease from my mouth when you kill me

@Olamide How the fuck do you keep a child you brought to Lagos all the way from ilorin in a house for almost 5 years without allowing her drop anything for 3 years, You rejected all my shows for no fucking reason. And I was nothing but grateful because at least I dey YBNL

@olamide I did not beg you or reach out to you for a record deal, I was minding my business when you reached out to me. 5 years, 4 singles, 4 videos. Na so you reach where you dey??? Oga I go use you write bestseller since na all of us dey craze. No be only hand that fed you.

Depending on your fans to bully me into silence, My dia nobody can bully someone that doesn’t have shame

And those ass kickers who will lick anything as long as it has money attached to it will troop in. If anything happens to me y’all know who to call. 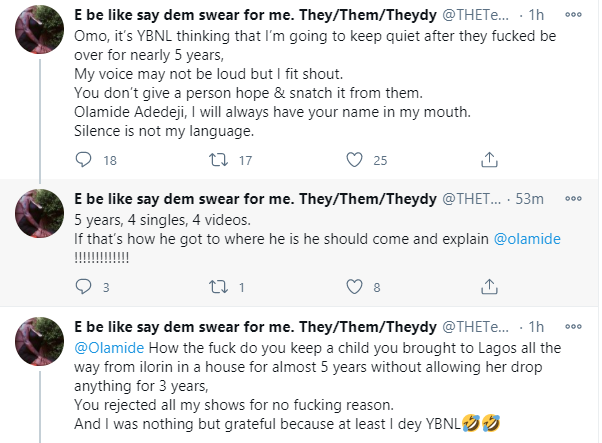 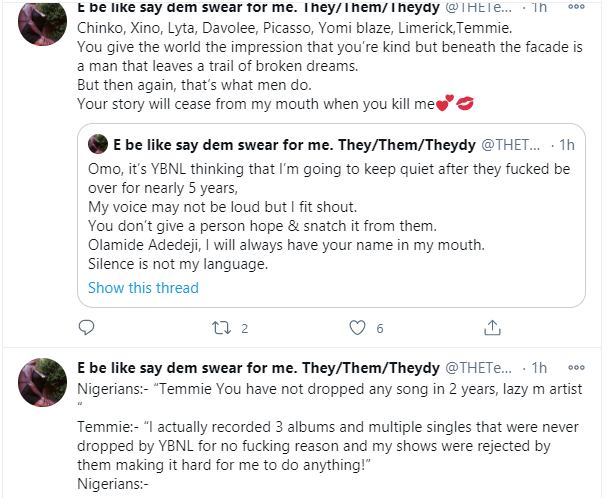