Tragedy struck as twins boy fall and drown in a swimming pool in South Africa. According to the man who identified Ivan Id Ikes via his to facebook narrated how the twins drowned and dead. 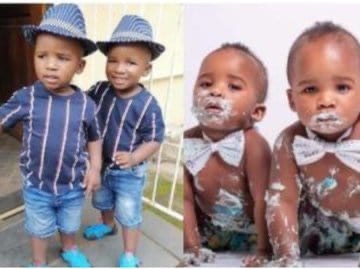 ”The twins passing.. How it happened.

The parents went to sympathise with another family member and left the boys with the live-in nanny who according to her had a bad tummy and had to use the toilet and that when the boys got into the pool. CCTV footage told us a different story completely..

The boys were watching tv.. she went upstirs and either fell asleep or watched tv or was on her phone.. the boys got up went outside and somehow after fiddling got the gate to the pool fence open. The 1 kid fell in and the other 1 after what seems him beckoning to his brother to come out jumped in to save him.. they hung onto the keepy krawly for as long as they could until eventually succumbing to their fate.

After exactly 48mins the nanny is seen again for the ist time trying to help.

too little and way too late. If it wasn’t for the CCTV we would not have known all this. My people.. if you have young kids at home.. forget the mad Christmas spending and invest in cameras. they don;t lie”