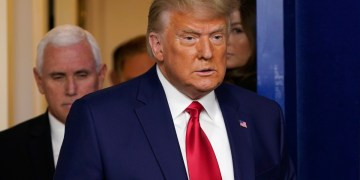 US president, Donald Trump is reportedly trying to bring back firing squad executions as an option for the federal death penalty, in his final days in the White House.

According to a ProPublica report on Wednesday, before Trump’s term ends, he’s trying to push through “a proposed regulation that could see federal executions being carried out by firing squads.”

The proposed rule change was reviewed by the White House and cleared on November 6, and it would be a sharp contrast to incoming president Joe Biden’s policies as he opposes the death penalty.

Firing squads are currently legal in three states — Mississippi, Oklahoma, and Utah but are illegal in other parts of the country.

The last time a firing squad was used in the US was in 2010, when Ronnie Lee Gardner was killed in Utah. Garder was convicted of the 1984 murder of attorney Michael Burdell during an attempted escape from a courthouse.