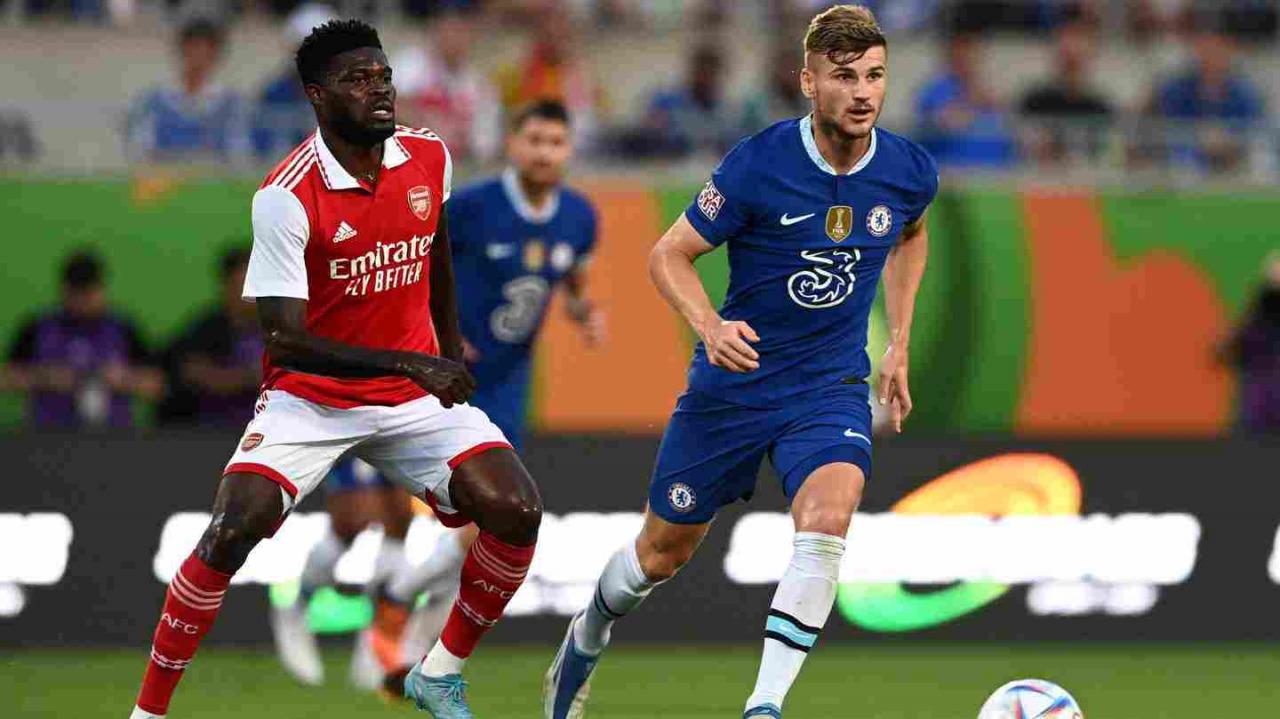 Chelsea fell to an embarrassing defeat in their last match of the pre-season tour in the United States, losing 4-0 to Arsenal at the Camping World Stadium in Orlando.

Arsenal were ahead on the 15 minute mark following a misplaced pass from Trevoh Chalobah. Gabriel Jesus was found in acres of space before chipping over Edouard Mendy to put the Gunners infront.

10 minutes before half-time, Arsenal found themselves two ahead as Gabriel Martinelli found Martin Odegaard, who finished with a low left-footed strike.

Just after the hour mark, Arsenal made it three despite Mendy’s best efforts. A double save from Martinelli and Xhaka saw the goalkeeper do his best to keep the scoreline at 2-0 but a rebound saw Bukayo Saka convert as the scoreline became embarrassing.

Albert Sambi Lokonga saw things go from bad to worse, netting in the last minute to see the Blues fall to a 4-0 defeat.

Kalidou Koulibaly made his first appearance after his £34 million move from Napoli, giving Chelsea fans something to look forward to about in a woeful performance.

Here is how Absolute Chelsea rated the Blues’ performance in Orlando:

The Senegal international made a good save from Saka in the first half but was at fault moments later, after a poor bit of distribution nearly gifted Arsenal an opener. There wasn’t much he could have done for the eventual opener, as Jesus dinked the ball as he rushed the Brazilian. The second goal saw Mendy give away possession with a poor bit of distribution before Arsenal converted. The goalkeeper was unlucky for Arsenal’s third, making a double save but his defence were unable to clear before Saka converted. Made an mpressive save from a Nicolas Pepe free-kick in the dying moments.

The first half saw James fairly uninfluential in a right full-back role, with Chalobah’s defensive uncertainties not allowing James to push forward and attack. The change to a back three in the second period no doubt helped as the wing-back was given more freedom to attack.

The defender looked shaky in a back four, misplacing a pass for Arsenal’s opening goal. Was never comfortable before being substituted through injury.

A calm head at the back for Chelsea, Silva was not particularly impressive nor unimpressive for the Blues. Probably the best defender in the first period, showing he can fill in and play in a back four if required but will need quality around him if Chelsea are to build on their impressive defence of recent years.

Failing to impress in a back four, Emerson’s passing was woeful. The full-back did not have the opportunity to get forward as he would have liked in an overall frustrating performance.

The highlight for Chelsea in a woeful first half, playing in his natural position that was previously seen under Maurizio Sarri, Jorginho controlled the tempo and was the only calm head in the Blues’ midfield. Under pressure, he often passed his way out of tight situations.

The midfielder flew in with several high and risky challenges, which would likely result in booking in a competitive match. He failed to impress on the ball, one of the most disappointing performance of the night.

The 23-year-old had the Blues’ only real chance of the first-half, cutting in off the right before firing a shot onto the post. Worked hard out of possession but was ultimately part of a poor attacking performance for Chelsea.

The most impressive player in Chelsea’s attack, Sterling was leading all things good for Tuchel‘s side. A lovely bit of play on the right hand-side saw him perform a couple of step-overs before finding Mount, who hit the post.

The German appeared a frustrated figure, failing to get into the match as he often occupied the same positions as Sterling. A chance fell to him during the first period, but he was unable to control and get a shot away in the box. Chelsea have a decision to make with their forward this summer.

An uneventful game for the man who has the responsibility of leading Chelsea’s line for the coming season. Havertz tried to get involved with some runs down the channel but it was the same old story for Chelsea, failing to provide for their striker.

Not much notable action for the Chelsea skipper but the Blues improved with his introduction, a calm head at the back who did not have much to do.

Alonso put in a sluggish pre-season performance, being skinned for Arsenal’s third goal. In attack, he looked dangerous and that’s saying something in a shocking attacking performance by the Blues. Performance was capped off as he pulled Marquinhos down on the counter-attack to go into the referee’s book.

Changing the game as he came on, Chelsea were suddenly in control. Kovacic provided a cool head in midfield, with his ability to beat the Arsenal press relieving much of the pressure from the Blues defence. Once again, Kovacic has proven that he should be the fist name on Tuchel’s team sheet.

The American hardly had a kick of the ball due to no fault of his own. Appearing to play in a front two with Havertz during the second half, Pulisic dropped deep to receive the ball but struggled to get into the game.

Ziyech looked predictable when he came on, turning onto his left-foot most of the time. Arsenal did not struggle to deal with this, as the Moroccan didn’t have much time to influence the match.

Trying his best after coming on, Batshuayi sent a half-chance over with with a header. Another attacker that struggled to get involved.

Chelsea got their first glimpse of their new signing, who after finally being introduced was a bright spark in an unimpressive performance for Tuchel’s side. The 31-year-old showed his pace, beating Pepe before winning the ball and out-muscling the Ivorian. A sliding tackle denied Pepe from close range, with Koulibaly showing his class early on. Was booked in the last minute for a last challenge.

Booked in his first involvement in the game, halting an Arsenal counter-attack as he played in midfield. His most impressive performance of pre-season has come in a back three against Club America, where Tuchel may have to look at him again.

Looked a bright spark when brough on at his unpreferred position at wing-back. Did his best to bring energy into the match despite being introduced late in the game but ultimately did not have enough time to influence the match.