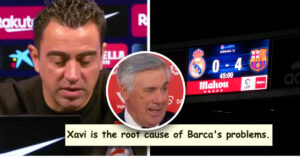 One Madridista – whose opinion is quite popular with the Whites’ fans – believes Barcelona were paying too much attention to what’s happening at Real Madrid.

He calls it the main reason behind Barca’s dip in form.

“Xavi is the root cause of Barca’s problems,” Tribuna.com user Funsofako says.

“1. They are too focused on Madrid losing points instead of studying their stubborn opponents and how to beat them.

“2. Beating Madrid 4-0 has gone into their heads, making them believe they can beat every team coming against them – which is the reason they lost the Europa League to Eintracht Frankfurt.

“3. Humility and seriousness is what Barcelona lack.”

Well, we can’t quite agree with this. Xavi has always said that Barca’s key objective is to qualify for the Champions League, win as many games as possible and see where it takes them.

In the first half of the season, it was impossible to believe that Blaugrana would turn things around – and yet we made people speak about this miracle, which is exactly Xavi’s merit.