Home SHOWBIZ Rihanna Reveals How She Told ASAP Rocky She Was Pregnant in ‘Vogue’...

Stop what you’re doing, Rihanna is on the cover of Vogue and looks legitimately stunning. But gorgeous photos aside, she opened up about alllll kinds of things, including moving ASAP Rockyout of the friend zone. 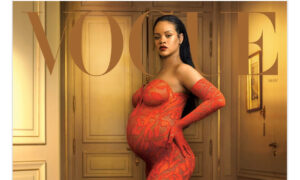 “People don’t get out of the friend zone very easily with me,” Rihanna said. “And I certainly took a while to get over how much I know him and how much he knows me, because we also know how much trouble we can land each other in.” She also recalled their performance at the VMAs in 2012, when “He grabbed my ass on stage. That was not part of the rehearsal! I was like, What are you doing!? My manager was like, Oh, God, she must like this guy a little bit. She never lets this shit slide.”

Things moved from friendship to romance during the pandemic, during which Rihanna says “He became my family in that time.” The pair took a road trip from Los Angeles to New York, which solidified their bond. “I cooked our food on this little janky grill I bought from Walmart. I still have it, too. It works like nobody’s business. I love the simple things but also the grand adventures. There’s no pretentious my-brand-your-brand bullshit, it’s just us living. I just feel like I can do any part of life by his side.”

And when asked what she loves the most about the relationship, Rihanna said “Transparency with everything: how we’re feeling, what our goals are, what our fears and insecurities are. The vulnerability to be able to say what you feel about each other.”

I MEAN! Obsessed with all of this. Also, Rihanna confirmed that she and Rocky weren’t “planning” to get pregnant, necessarily, but also weren’t not-planning. As she put it, “Planning? I wouldn’t say planning. But certainly not planning against it. I don’t know when I ovulate or any of that type of shit. We just had fun. And then it was just there on the test. I didn’t waste any time. I called him inside and showed him. Then I was in the doctor’s office the next morning and our journey began.”