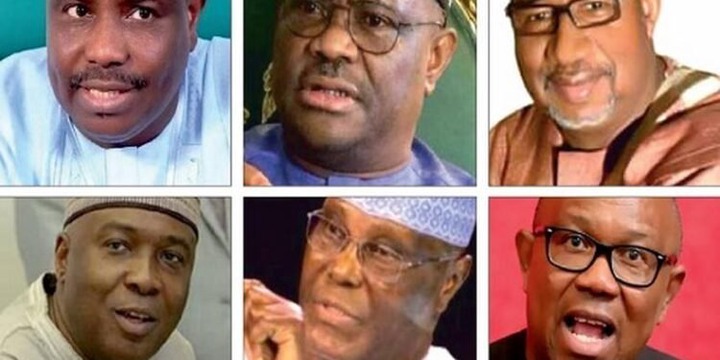 There is growing anxiety in the Peoples Democratic Party (PDP) as stakeholders await the decision of  the party’s panel on zoning of the 2023 presidential ticket of the party.

The 2023 PDP zoning committee headed by Benue State Governor, Samuel Ortom, was set up by party’s National Executive Committee (NEC) last month to come up with a formula for the zoning of its 2023 presidential ticket.

Become a partner with USA companies, promote their offers and get paid in US Dollars weekly, Nigerians are earning about $465 weekly. .

The 37-man committee, which has two weeks to complete its assignment is expected to announce its position at the end of its meeting tomorrow.

The outcome of the panel’s report would determine the fate of former vice president Atiku Abubakar, Rivers State Governor, Nyesom Wike, former secretary to the Government of the Federation (SGF), Anyim Pius Anyim, and former Anambra State governor, Peter Obi, in the PDP presidential primary scheduled for May 28 and 29.

The PDP committee on the review of the 2019 general election had recommended that the 2023 presidential ticket be thrown open to all qualified aspirants.

Regardless, the issue has been generating concerns in the party as leaders from the North and South disagreed on whether the ticket should be zoned or thrown open to all qualified aspirants.

While PDP from the North are pushing for the ticket to be thrown open, the South East, South South and South West chapters of the party have continued to insist the ticket should be ceded to the South in line with principle of rotation of elective offices as enshrined in the party’s constitution.

Daily Sun gathered that in the last few days there have been serious horse-trading as the two camps make frantic efforts to advance their positions. However, a party source told Daily Sun that the northern group opposed to zoning seemed to be having an upper hand.

“The truth is that several leaders of the party believe that a northern candidate is best suited to win the 2023 presidential poll for the PDP. And more than anything else, we want to win the election.

“However, there have also been argument from some leaders in the South, that majority of the presidential aspirants from the North were responsible for the party’s loss in 2015. And should not be rewarded with the 2023 presidential ticket.”

Another source told Daily Sun that the 37-man committee, which consists of one member from each of the 36 states and the Federal Capital Territory (FCT, is skewed in favour of the North. Consequently, he noted that the committee is likely to throw the contest for the PDP primary.

Meanwhile, the presidential ambition of Governor Wike, has received a boost as leaders and stakeholders in the Lagos State chapter of the People Democratic Party (PDP) gave him their blessings.

Speaking during a visit by Wike and his Oyo State counterpart, Seyi Makinde, to the Lagos office of the former deputy national chairman of PDP, Olabode George, the party leader said Nigeria needs a president that can take it out of the doldrums and Wike has the capacity to do so.

George, who spoke on behalf of the ward and local government chairmen of the party who were all present, said the party is ready to support Wike and give him their backing.  “The governor told us in clear terms what he wants. When it comes to courage and resourcefulness, he has it in abundance. He also has age on his side. We need a bright person who can bring us out of the doldrums and we’re ready to support you in Lagos. It shall be well with you.”

On his ambition, Wike said we cannot continue to allow the country go the way it is sliding and something has to be done, while insisting he has the capacity to take back power.

“All I have come to say is that I want to be given the opportunity on May 28 and 29 to represent PDP in the fight coming up in 2023. We must win this election. What we are going to do is to go and take back the power and give to PDP. We are not begging. We are ready to take it back because the power belongs to PDP,” Wike said.