Home GOSSIP I Met N42000 In My Husband’s Account After His Death, Benson Idahosa’s...

Contrary to the notion that the late prolific Pentecostal preacher and founder of Church of God Mission International (CGMi), Archbishop Benson Andrew Idahosa left behind lots of wealth for his family after his death 23 years ago, the wife of the renowned cleric, Archbishop Margaret Idahosa, has revealed that her husband only left the sum of N42,000 in his bank account. 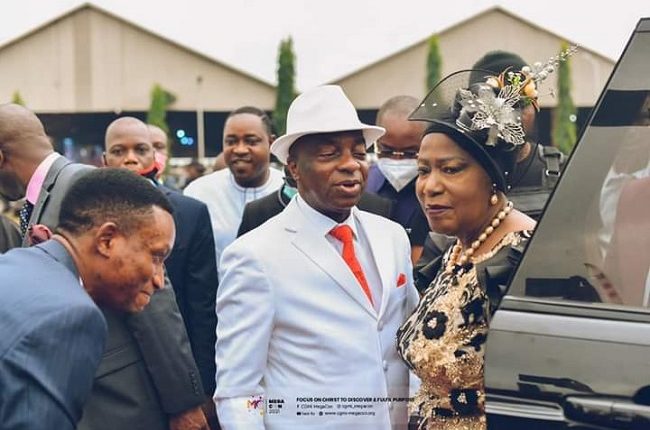 Idahosa’s wife revealed this at the just-concluded CGMi Mega Conference themed, “Focus on Christ.” She was appreciating one of the late Archbishop’s ‘sons in the ministry,’ Bishop David Oyedepo, whom she described as a great support to the family and the ministry since the death of her husband.

While expressing her profound gratitude to Oyedepo, specifically his support for the growth of the legacy of his father in the Lord over the years, Mama Margaret Idahosa noted that Bishop Oyedepo’s generosity was second to none, even though he has been extending the hand of fellowship silently.

“When the Archbishop passed, Benson Idahosa University was just birthed. I met N42,000 (forty-two thousand naira) in his account, that was all that was left for me. But the bishop took it upon himself to be paying all the professors and teachers; it was two years. For two years, at the end of the month, he will fly in with the money.

“Who can do that? If not one who is convinced and with confidence in us and with the ministry. But he did it, nobody knows it. He does it quietly and goes. I want you to open your mouth and begin to pray for this man of God.

“When I came from America, he called me and said mum, when you land Lagos, the jet will be waiting for you to take you to Benin. And true to the fact, I landed, the jet I didn’t buy, I didn’t spend any money. I don’t know where it came from, it was parked at Murtala Mohammed airport with red carpet. Anybody that says prosperity is not good when he tastes small of the prosperity, he will change the mind,” she added.

Mama Idahosa said: “I want to thank God for the life of Bishop Oyedepo. He is a son in the ministry and he has never proven otherwise. Each time I just call. I just called and said can you be with me today for two sessions? He said, whatever you say mum I am ready. We want to say a big thank you to him for honouring me. May God give you men and women who will increase you, who will bless you, who will add to you in the Name of Jesus. That is who he is to me and that is who he is to the family and the family of God. I know you know him, but I just want to tell you what he did and that is not up to the seed he sows to this ministry.”