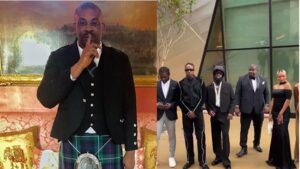 Nigerian music executive and record producer, Michael Collins Ajereh better known as Don Jazzy, has taken to social media to bask in the joy of his artistes having a successful year.

He revealed that every artiste signed to Mavin Records has been booked for shows, performances and other events.

According to Don Jazzy, they are all busy doing what they do best, which is making music and thrilling fans with performances.

He stated this with pride and gave thanks to God for making the success of his signees greatly possible.

Fans and followers stormed his comment section to plead with him to also give them a chance to be heard since all his artistes are busy.

Some upcoming singers posted demos of their songs and said that they can be great if he decides to support them.

Magixx, one of the newly signed singers recently showed appreciation to the Mavin boss for giving him n opportunity to show his talent. He prayed for Don Baba J to keep having Almighty God by his side

”THANK YOU FOR GIVING ME A VOICE @DONJAZZY MAY GOD NEVER LEAVE YOU SIR”, the singer wrote.

In response, Don Jazzy thanked Magixx for the confidence reposed in him as he undertakes the music journey.

He also said a bold Amen to the prayer and extended some heartfelt congratulations to Magixx on having a showcase which turned out a huge success.

The producer wrote; ”AMENNNNN . Thank you for trusting us as your partners on your journey. Congratulations on a successful showcase last night. 🤍🐘”