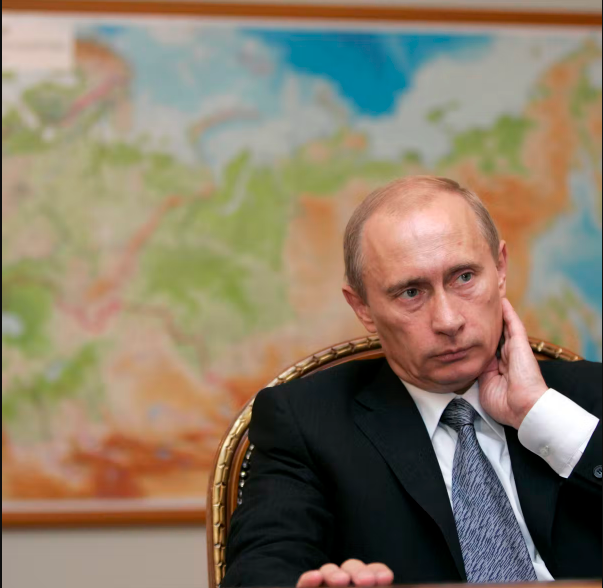 Russian president, Vladimir Putin has suffered another devastating blow after his force’s death toll rose to 18,300 in the war in Ukraine, according to Kyiv estimates.

Russia has only admitted 1,351 of its troops have died fighting in Ukraine since Putin invaded on February 24, a fraction of the figure estimated by Ukraine’s armed forces.

In a further blow to Putin’s war, Ukrainian forces have also retaken some towns in the northern Chernihiv region, whilst Russian forces no longer occupied any areas in the Sumy region, in Ukraine’s northeast.

Ukrainian soldiers also blitzed a Russian military convoy in an effort to disrupt deliveries of fuel and supplies to Putin’s troops on the frontline, as what appears to be a rocket before bursting into flames.

But Russian attacks on civilian areas have continued, with eight people killed and 34 wounded after shelling hit the southern Ukrainian cities of Mykolaiv and Ochakiv on Sunday, prosecutors in Kyiv said.

‘As a result of enemy shelling, seven residents in Ochakiv were killed and another 20 were injured. In the city of Mykolaiv one person died and 14 people were wounded, among them a child,’ it added.

Meanwhile, Russia is continuing to build up both its soldiers and mercenaries from the notorious Wagner Group, a private military company known as ‘Putin’s private army’, in eastern Ukraine, British intelligence chiefs said.

Across the country, Ukrainian forces are also preparing for what its general staff said were about 60,000 Russian reservists called in to reinforce the offensive there.

‘Russian forces are continuing to consolidate and reorganize as they refocus their offensive into the Donbas region in the east of Ukraine,’ Britain’s Ministry of Defence said in an intelligence briefing today.

It said Russian troops are being moved into the area, along with mercenaries from the Wagner private military group. Moscow says it is currently focusing its offensive on the Donbas, where Russian-backed separatists have been fighting Ukrainian forces for years.

Missiles also struck near the southern port of Odesa, with Russia saying it had destroyed an oil refinery used by the Ukrainian military. The Odesa city council said ‘critical infrastructure facilities’ were hit.

Serhiy Gaidai, the governor of eastern Luhansk region, said Russia was building up forces to break through Ukrainian defences.

‘I am urging residents to evacuate. The enemy will not stop, it will destroy everything in its path,’ he said in comments carried on Ukrainian television.

Overnight, the UK said Russia was still trying to take the southern port city of Mariupol, which has seen weeks of intense fighting.

‘Mariupol is almost certainly a key objective of the Russian invasion,’ the MoD said, ‘as it will secure a land corridor from Russia to the occupied territory of Crimea,’ in the south, which Moscow annexed in 2014.