Home NEWS “NYSC Program Will Be Extended By 1yr & Corpers Will Be Recruited... 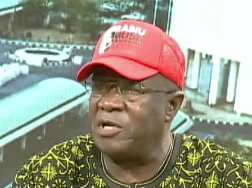 The Deputy National Chairman of the NNPP, Air Vice Marshal John Ifemeje (retd), has disclosed part of the way his party’s presidential candidate, Rabiu Kwankwaso will achieve his promise of increasing the strength of the nation’s armed forces to one million personnel.

It would be recalled that during the presentation of his manifesto in Abuja, Kwankwaso argued that increasing the size of the armed forces is one way to tackle the country’s security situation and that if elected, he would “increase the strength to one million by recruiting 750,000 personnel”

In an interview with AIT News, Ifemeje disclosed that part of the way Kwankwaso will recruit the said number of personnel into the military if he becomes president is through the National Youth Service Corps (NYSC) program. He said the program will be extended by 1 year which will be used for military training and corps members who participate in the training will be absorbed into the armed forces.

About 1:49:30 minutes into a video shared on YouTube by Arise News, John Ifemeje said “Our youth service will be extended by one year. After the normal youth service, one year will be for military training and those who pass through the military training will be absorbed into the armed forces. We are going to have border police, forest guards, and coast guards. These are part of the one million we are talking about”.