Marcus Rashford and Phil Foden starred to send England through to the World Cup knockout stage as Group B winners after a 3-0 victory over Wales on Tuesday. 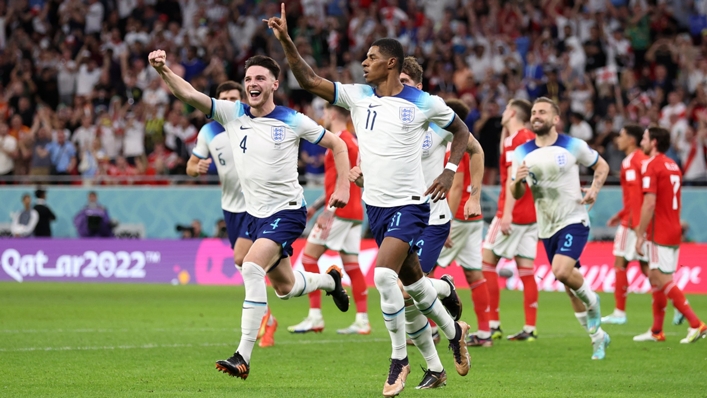 Victory sets up a last-16 clash with Group A runners-up Senegal on Sunday for England, while Wales crashed out in Qatar without a win for the first time in a major tournament.

Foden started at Ahmad bin Ali Stadium after being left out of the goalless draw with the United States on Friday and won the free-kick for Rashford to break the deadlock in the 50th minute.

Manchester City star Foden extended the lead just a minute later before Rashford doubled his account to eliminate an uninspiring Wales from Group B, in which the USA beat Iran to progress as runners-up.

Rashford spurned a glorious ninth-minute opportunity after being denied by the onrushing Danny Ward, who replaced the suspended Wayne Hennessey.

England continued to dominate possession without testing Ward often as Foden blasted over on the turn, while Joe Allen angled a rare Wales chance off target before the break.

A masterful Foden drive ended with an England free-kick in an inviting position before Rashford whipped into the top-right corner to beat an unsighted Ward.

Harry Kane drilled across the area from the right soon after for Foden to convert at the back post, before Jordan Pickford parried from Kieffer Moore to keep Wales at bay.

Ward was again beaten with somewhat ease as Rashford powered through the legs of the goalkeeper, who denied Jude Bellingham to keep the scoreline down late on.

What does it mean? England continue Wales dominance to book last-16 berth

The pressure ramped upon England after an underwhelming showing in the USA stalemate but Southgate’s side responded well in their first World Cup meeting with a fellow British side.

England remained patient throughout and reaped well-deserved rewards in a rapid second-half opening to ensure a seventh straight victory over Wales, scoring 14 and conceding just one in that run.

Knockout football is where England have impressed in recent years and Southgate will know it is time to deliver again, while Wales head home after disappointing in just their second appearance in the tournament.

Rashford will have been frustrated to chip a presentable opening at the incoming Ward in what proved to be England’s best first-half chance.

But the forward made amends after the interval with two goals, while recording game-leading figures for touches in the opposition box (eight), shots (six) and attempts on target (four) in an encouraging showing.

Bale missing on the world stage

Gareth Bale had the fewest touches of any Wales players to complete 90 minutes in both games against the USA and Iran, though a penalty in the first outing somewhat sheltered the Wales captain from criticism.

The 33-year-old was again largely a passenger in the Middle East against England, managing just four passes and seven touches – both the fewest of any player to start – before his half-time removal.