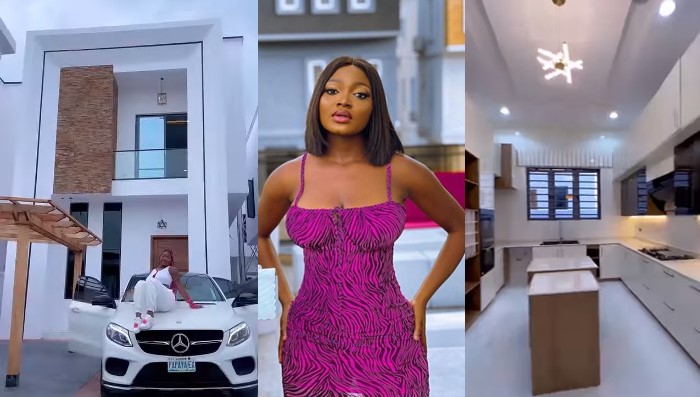 The brand ambassador took to her social media page on Saturday, 1st October to announce that she’s the latest landlord in the commercial city.

Papaya, who is also called Abike Arab Money showed off the beautiful edifice in video she posted while describing it as one of her big girl achievements.

The internet celebrity also gave the consideration of referring to her latest acquisition as an early birthday gift.

She announced that there would be a house warming party in December and only those with asoebi will be allowed to attend.

She gave a tour of the spacious house which also has a swimming pool customised with her name at the bottom.

Sharing the video, Papaya wrote; ”One of my big girl achievements!🥺 Will I call this early birthday gift?🙈…… #LandladyBigpaps house warming party this December!

Aso Ebi is your invite🥰 @bigpaps2022 for party info!Limited only 💯 Anticipate Luxury party of the year!🔥 stop playing!!”

Billionaire Otedola’s Daughter, DJ Cuppy Causes Reactions As She Shares Photo On Her Outing In Dubai

He Did It To Pepper Her – Nigerians React After Wizkid’s Babymama, Jada P Shared Cryptic Message To Singer Saying He’s Single