India and Asia’s richest man, Gautam Adani, has had a great year,

He briefly overtook Amazon founder Jeff Bezos as the second richest man in the world after toppling Bill Gates to the fourth position earlier. 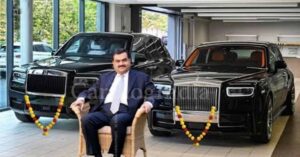 A brief but strong race to the top

According to CNBC, Gautam Adani is now ranked the fourth wealthiest person in the world.

But he is still richer than Microsoft Founder Bill Gates and renowned investor Warren Buffet.

Hermindra Hazari, a research analyst based in India, said that the type of rising that Adani had is phenomenal and unparalleled in the world.

Hazari said that in such a short time, a single individual has acquired assets across industrial sectors and has emerged as one of the most prominent billionaires in the world.

Adani came from middle-class family background and began his entrepreneurial journey in India’s financial capital, Mumbai, as a diamond sorter in the late 1970s,

He is now the chairman of the Adani Group, one of the three largest industrial conglomerates.

In August, he toppled Microsoft founder Bill Gates and LVMH boss Bernard Arnault to the third and fourth positions, respectively.

In September, he rattled the world to emerge the second-richest man in the world, albeit briefly.

there is a new record holder in the billionaires ranking.