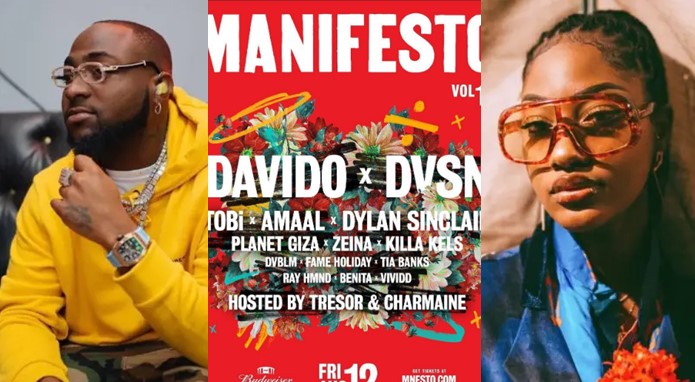 A concert scheduled to hold in Canada has witnessed a dramatic twist following a change in the performing artistes lineup.

Nigerian songstress, Tems, had reportedly been billed to perform at Manifesto Festival in Canada but was unable to make it due to visa issues.

The organisers then decided to replace her with music star, Davido, but fans expressed displeasure with the choice especially as he was made to headline the show alongside DVSN.

In reaction to the development, fans who did not accept the new arrangement began to demand refund of their money.
Teasha.trista: Can you please authorize refunds!!

Akilah.jj: I need my money back.

444thegworls: I want a refund.
Suzymoments: Integrity is key to fans trusting your future events. You need to allow refunds.

Mspositivevibes: Open up the refunds, people want their money back!!

Monika_mjones: Y’all need to run people their money back, this is not the show I bought tickets for. 2 female headliners were the pull, not DVSN and Davido. This is not it.
Meanwhile, some people who were privy to information about what transpired took to Twitter to share the details.

The tweets read; ”Yesterday: Due to visa issue, Tems canceled a show she was to headline in Canada, the organizers billed Davido as replacement, but people got mad and requested for refund, saying they don’t want NOISE.

”Davido was used as a replacement for Tems at Manifesto festival and look how fans are asking for refunds. No one wants to see a flop artiste perform.
”Tems was paid to headline a show in Canada but due to Visa issue she won’t be able to get to Canada…her replacement was davido.. people are asking for refund.. self acclaimed African Alist artist… Big disrespect…my guy even post am”

The organisers eventually gave in to fans demand after facing massive backlash as they decided initiate refunds to their patrons.