Home POLITICS APC Is Happy Atiku Might Not Get Votes In Southsouth and Southeast...

The Director General Voice of Nigeria, Osita Okechukwu was on Arise TV when he said that Northern christians will not vote for the Peoples Democratic Party (PDP), but they will vote for the All Progressives Congress (APC). Reuben Abati asked him how this is possible, because it is the PDP that have created a religious balance by fielding a Muslim and a christian, while the APC will be fielding a Muslim-Muslim ticket.

According to Reuben Abati, the Christian Association of Nigeria (CAN) and the Pentecostal Fellowship of Nigeria (PFN) have told their congregation not to vote for a Muslim-Muslim ticket, because of the religious imbalance. He asked Osita Okechukwu what have him the confidence that the Northern christians won’t vote for PDP. 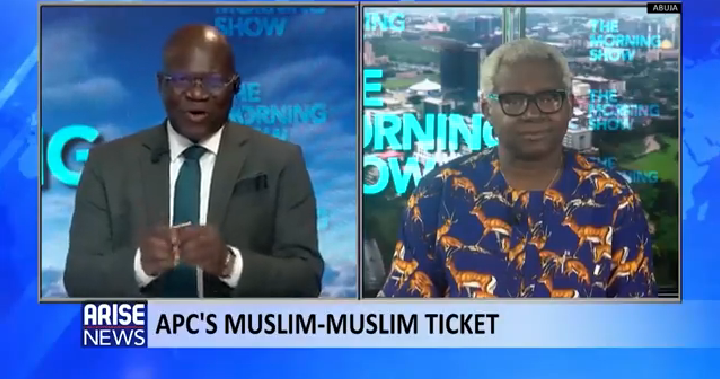 Osita Okechukwu noted that his analysis is based on his experience in Nigerian politics for the past 44-years and his study of social sciences. He said that 24-hours is a long time in politics, talk less of six to seven months to the election.

He said the present condition of Nigeria will make people get inclined to look at what the presidential candidates of each party is presenting to solve the issues in Nigeria. According to him, he personally would have preferred if Asiwaju Bola Ahmed Tinubu would have presented a christian running mate

But his preference might not be the reality on ground, as Tinubu must have considered all the variables. All the data’s of the election that have been held in Nigeria have showed that there’s no instance where all christians will decide to vote for a particular candidate, or all muslims voting for a Muslim candidate because of religious sentiments.

Osita Okechukwu said that this might not be an exception, because people will definitely vote for other candidates like Peter Obi and Kwankwaso. He said that they are happy Atiku might not get votes in the South-South and Southeast as PDP used to, because of the emergence of Peter Obi. Watch the video here at 3.08 minutes.