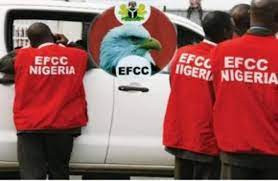 Operatives of the Economic and Financial Crimes Commission (EFCC) on Friday, July 29, raised Wuse Zone 4, Abuja, one of the hotspots for most bureau de change operators in the Federal Capital Territory,

According to reports, the antigraft anti-graft agency raided the spot after receiving intelligence that some forces with massive naira inflow have mobilized resources and are busy buying up available foreign currencies especially the United States dollar, to either hoard or smuggle the same out of Nigeria.

Some operatives of the Commission have also been spotted at major airports in the country, in what a source said is a coordinated nationwide operation that will be extended to all the major commercial cities such as Kano, Lagos, and Port Harcourt.

This development comes even as the Naira continues to depreciate in the parallel market.

As of today, the Naira exchanges for over N700 to a dollar.

Otitoju Reveals How Kidnappers Arrange for Ransom Without Getting Seen

Tipper crushes father of 30 children to death in Kogi