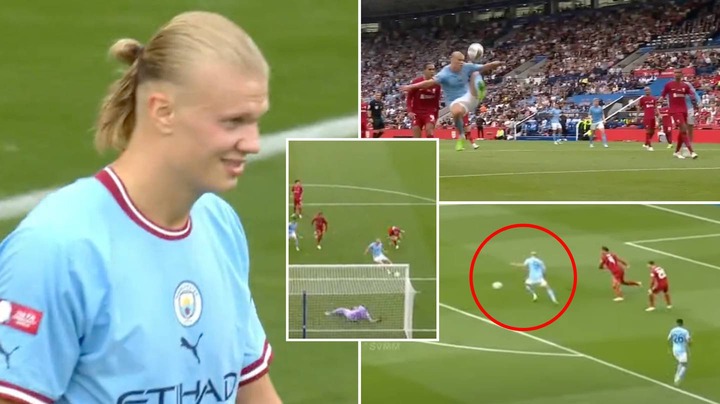 A compilation of Erling Haaland‘s performance in Manchester City‘s 3-1 defeat to Liverpool in the Community Shield has emerged.

The 22-year-old started up front at the King Power Stadium and struggled throughout.

Haaland touched the ball just eight times in the first half and missed two glorious chances. The first saw him fire the ball straight at Liverpool goalkeeper Adrian, while the second was a cross he sent high into the air.

He didn’t fare much better in the second half an an underwhelming evening was summed up when he rattled the bar from six yards out during injury time.

The Norway international put his hand to his head after that and he knew it was a big chance to open his account in English football.

Safe to say it wasn’t his day and it’s worth stressing, this doesn’t make Haaland a flop already.

Some were left underwhelmed by his showing however and have had their say on social media.

One person said: “Van Dijk had him in his pocket I’m afraid.”

Another tweeted: “He looked nervous all game.”

Someone put: “Can tell he was playing in his own head at times.”

While a fourth commented: “I think he’ll get better but this was a bad start.”

Both players and especially Nunez have been mocked on social media, with the latter getting it worst after mixed performances in pre-season.

Carragher said: “The #Haaland banter compilations will be everywhere this week after that miss, just like #Nunez last week. From [clown emoji] who have never kicked a ball in their life.”

Haaland hit the ground running with RB Salzburg in Austria and Borussia Dortmund in Germany previously, but the Premier League will be another matter entirely.

He told reporters: “He [Haaland] had chances – two or three in the first half and one at the end. Always he was there. He fought a lot and made the movements.

“It is good for him to see the reality in a new country and a new league but he was there. He didn’t score. He has incredible quality and he will do it.”

Dembele is Back Again and Destroying Defenders vs Benfica