Home SPORTS Barcelona chief, Joan Laporta vows to do everything he can to re-sign... 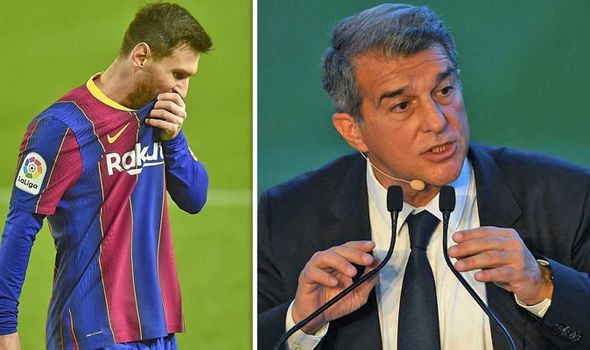 Barcelona president, Joan Laporta has vowed to do all he can to re-sign Lionel Messi next summer when the PSG star’s contract expires.

The Argentine playmaker, 35, exited the Nou Camp to join the French giants on a free transfer in 2021, ending his 21-year Barcelona career.

Laporta, who admitted he feels ‘indebted’ to the Argentine superstar, is set to do everything to bring him back to the Catalan club next year.

‘I would like him to end his career in a Barca shirt, and be applauded at all the stadiums.

‘I feel partially responsible for how things ended, and I feel that this is a temporary end and that we will make this dream a reality. At least that is the dream.’

Recall it was a bitter end for Messi after he submitted a transfer request via burofax after Barca were thumped 8-2 by Bayern Munich in the Champions League back in 2020.

The playmaker almost made a U-turn to remain at the club, but the ongoing financial problems worsened by the Covid-19 pandemic prevented Barcelona from offering Messi a new deal, paving the way for him to join PSG.

Messi notched 670 goals and 302 assists in 776 games during his two-decade spell with the LaLiga giants.