Following the prolonged industrial action by the Academic Staff Union of Universities, ASUU, the Nigeria Labour Congress, NLC, and some other unions will begin a nationwide protest today (Tuesday). 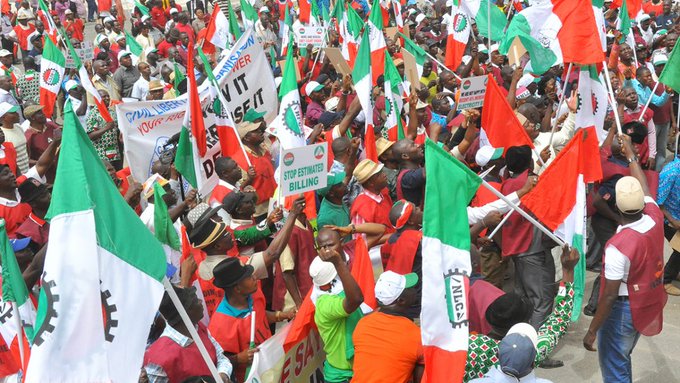 university lecturers on February 14, 2022, shut down public universities over the inability of the Federal Government to implement agreements the two parties entered into in previous years.

Despite negotiations and interventions by concerned citizens, the FG and the ASUU are yet to settle their differences after nearly 6 months.

The NLC had alerted Nigerians that July 26 and 27 would be National Days of Protest across the country to force the FG and the striking lecturers to resolve their issues and suspend the lingering strike.

The union had said the protest would hold at all the State capitals, while the mega rally would take place in Abuja to pressure the Federal Government to meet ASUU’s demands.

About 40 NLC affiliates, including aviation, bank, oil and gas, electricity, construction workers and power holding companies are expected to participate in the protest.

workers in the power sector under the aegis of the National Union of Electricity Employees (NUEE) confirmed at the weekend that they would join NLC in the nationwide protest.

The protest is coming amid security threats across the country as the bloodthirsty bandits continue their havoc in many States and the Federal Capital Territory, Abuja.

But a police source from the FCT police command told DAILY POST that arrangements have been made to deploy officers in all the protest areas to avert security breach.

The source, who spoke on condition of anonymity, said, “The command is aware of the security situation in the country, particularly here in FCT, so officers will be mobilized to ensure safety of lives and properties during the protest.”

He, however, expressed fear that the protest may be hijacked by hoodlums.

“You know this is election time, definitely, politics may come in and that is where you may see hoodlums causing havoc in the name of NLC”, he added.