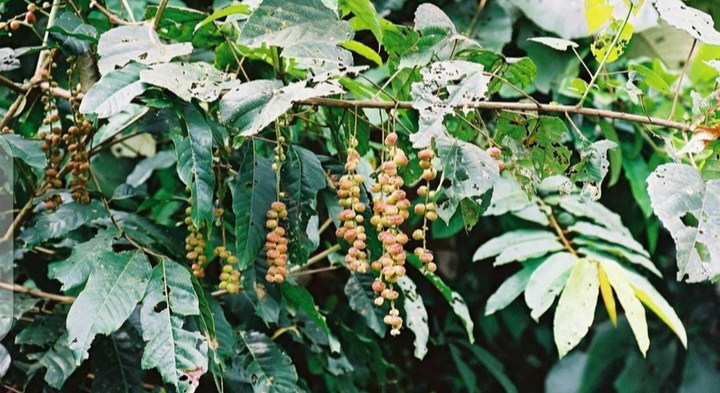 A new study from the United Kingdom (U.K.) has confirmed that a common plant from West Africa works as a treatment for sickle cell disease.

Scientists at Aberystwyth University, in Wales, isolated a chemical in the Alchornea cordifolia plant, also known as the Christmas Bush, which could help relieve the symptoms of the life-threatening and painful disease suffered by 15,000 people in the United Kingdom (U.K.).

The results were published in the Journal of Clinical Medicine.

Botanically called Alchornea Cordifolia, it is called Oje in Ebira-Etuno; Uwonmwe in Edo; Mbom in Efik; Tahi in Gwari; Bambani or Bombana in Hausa; Ubebe or Ububo in Igbo; Ipain in Ijaw; Ukpaoromi in Yekhee; and Epa or Ipan-esin in Yoruba. Alchornea Cordifolia is a perennial evergreen shrub that belongs to the family Euphorbiaceae. It is known as dove wood in English.

In sufferers of sickle cell anaemia, red blood cells change from their usual soft disc shape to a curved “sickle” shape and also become sticky and hard, which means they don’t move properly around the body.

Blood is blocked from flowing, particularly to joints, the chest and abdomen, leading to severe pain, swelling of hands and feet, delayed growth and problems with eyesight, among other symptoms. It can lead to stillbirth and is also fatal in some cases.

A genetic disease, it is more common among people of African, Mediterranean and Middle Eastern descent, with over 20 million people around the world affected.

In Nigeria, around 150,000 children are born with sickle cell anaemia each year. Half of them are likely to die before their 10th birthday.

Juice from the plant, which grows widely across the tropical regions of Africa, has been used in a “blood tonic” as a traditional remedy for generations, but it has never been scientifically proven to work until now.

A researcher at the university who suffers from the condition herself, Dr. Olayemi Adeniyi, interviewed traditional healers from South Western Nigeria, who said the plant had been used for years as a treatment.

Leaves are crushed manually or blended, and can also be brewed into a tea.

Adeniyi said the research had shown that quercitrin, the active ingredient in the plant, could both prevent and reverse the “sickling” caused by the disease.

She said: “Until now there has been no scientific proof of the plant’s effectiveness.

“The research is particularly important because so many people affected by sickle cell disease live below the poverty line and have no access to medicine. The plant grows in bushes and is relatively easy to grow on fertile land – all you need are seeds.

“It is crucial that people in the countries affected, Africa in particular, hear that this plant’s benefits have now been scientifically proven. Our findings show that this is a treatment that has firm scientific foundations, not just psychological ones.”

Existing treatments are expensive, and some involve blood transfusions. It can only be cured with a stem cell or bone marrow transplant, but this is rarely done because of the risks involved.

The finding “could inform efforts directed to the development of an anti-sickling drug”, the paper concluded.

The study formed part of an Aberystwyth University project looking at the scientific effectiveness of traditional and herbal remedies, which has also focused on developing new antibiotics to counter the growing problem of antimicrobial resistance.

Aberystwyth University is a public research university in Aberystwyth, Wales. Aberystwyth was a founding member institution of the former federal University of Wales. The university has over 8,000 students studying across three academic faculties and 17 departments.

Prof. Luis Mur, who led the research, said: “We’re running out of drug leads. There is recognition, especially with diseases, that they are evolving, and they’re evolving through misuse of antimicrobials for example, and so we need to look at new sources.

“So let’s go back to where traditional practices have actually given a hint that this particular plant or fungus has some efficacy.”

Meanwhile, earlier studies have validated its ethno-pharmacological uses with characterised pharmacologically active molecules. Infusion of the leaves is used in the treatment of respiratory problems such as sore throat, cough, bronchitis and intestinal problems such as gastric ulcers, diarrhea, amoebic dysentery and worms. Poultice of the leaves is also used to treat wounds.

Application of the leaves and root bark of Alchornea cordifolia is used in treatment of leprosy and as antidote for snakebite.

Alchornea cordifolia root and bark are used to increase sexual performances among the people of Congo in Africa sub-region. In Nigeria, it is used to treat gonorrhoea, yaws, rheumatic pain and cough.

Previous study by Nigerian researchers demonstrated that a combination of Alchornea cordifolia with two other local herbs could be used to boost the immune system, red blood cells and prevent development of degenerative diseases such as diabetes and cancer.

The researchers concluded: “It is significant to consider this research study, which elicited essential preclinical information progressing to anti-anemic herbal remedy development in the country. Therefore, possible isolation and feature of bioactive components should be accounted for with diverse pharmacological properties of Mojeaga herbal remedy in accordance with determine its bioactive guide to assay.”

Hidden Secrets Behind Black-Spotted Bananas You Have Never Known

3 Kidney Damaging Substances That Should Not Be Taken Often