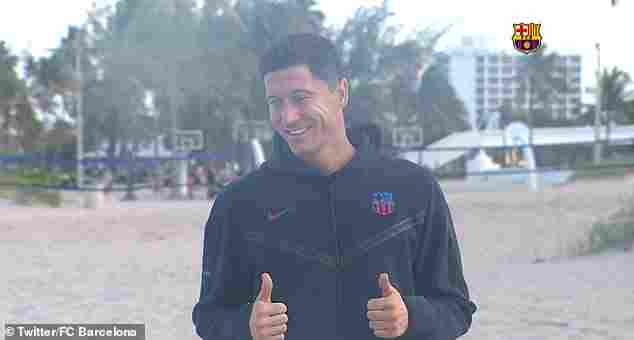 Robert Lewandowski has joined up with his new Barcelona team-mates in Florida after completing a £42.5million move from Bayern Munich.

The prolific Polish striker posed on a lifeguard station on the beach in the Sunshine State before embracing his new colleagues and club president Joan Laporta.

The 33-year-old, who scored a remarkable 344 goals in 375 matches for Bayern, vowed to return the glory days to the Nou Camp by scoring bucketfuls of goals in Spain.

‘Finally I am here and I am very happy to join Barcelona. The last few days were very long days but in the end the deal was done so now I am going to focus on a new chapter in my life and a new challenge,’ said Lewandowski.

‘But I am still the guy who wants to win, not only the game but also the titles so I hope from the beginning of the season we will begin winning and go for the titles during the season and at the end of the season.

‘I know that it’s time to get Barcelona back on track and I am here to help them get back to the top and to winning as many titles as possible.

‘I have been speaking with Xavi and I know that from the beginning I know his mind and his ideas are going in a good way. For me, he made it easy for me to come to Barcelona.

‘I am a player that wants to play and to win and with Xavi that is very possible. He knows exactly how to coach Barcelona because he was an amazing player and now he is a very good coach with an amazing future.

‘Goals are always a high. I always want to win, not only the games but also the titles. We have so many players with amazing quality and we can achieve a lot this season.’

Lewandowski could make his Barcelona debut when they play MLS team Inter Miami in the first match of their United States tour on Tuesday.

After that, they head to Las Vegas to take on arch-rivals Real Madrid on July 23 before further fixtures against Juventus in Dallas on July 26 and the New York Red Bulls on July 30.

Barcelona announced they had reached an agreement in principle for Lewandowski in a statement issued over the weekend and he flew out to Miami to undergo a medical.

The striker had informed Bayern of his desire to leave last month, with just one year remaining on his contract.

‘I will come back and say a proper goodbye to all the employees,’ Lewandowski told Sky Sports News in Germany. ‘I didn’t have much time to prepare for it.

‘These eight years were special and you don’t forget that. I had a great time in Munich.

‘I will fly soon, but after the training camp I will come back and say goodbye properly and organise a few more things.

‘I said goodbye to the guys on the pitch today. I wasn’t worried about an injury in training. Something can happen to me at home. I wanted to keep fit and trained with the boys again.’

The 33-year-old has some of the best goalscoring figures of any striker in Europe and netted an incredible 50 goals from 46 appearances last season.

He was in line for the Ballon d’Or in the 2019-20 campaign after smashing in 55 goals from 47 games, but was unlucky that the ceremony was cancelled amid the Covid-19 pandemic.

The following season he fired in another 48 but was beaten to the award by Lionel Messi.

He won the Bundesliga title in every season and also lifted the Champions League in 2020.