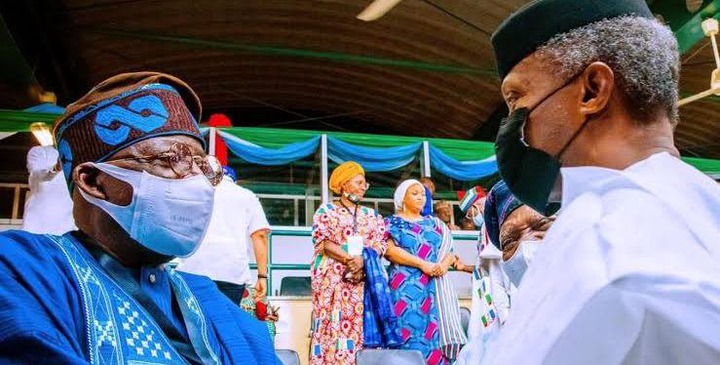 The Vice President,Yemi Osinbajo and the All Progressives congress APC Presidential flagbearer, Asiwaju Bola Tinubu will today,Tuesday arrive Osogbo , the capital city of Osun state to attend a campaign rally in preparation for the  governorship election coming up in the state which is scheduled for Saturday, 16th of July 2022.

Osinbajo and Tinubu would lead other APC chieftains at the national level and across the 36 states of the federation to the mega Political gathering which would come up at township Stadium in the state capital.

Spokesperson of the grand rally reception planning committee, Funke Egbemode, in a statement Monday said the rally is not just a gathering of party faithful but also of lovers of democracy and good governance, saying “those are the things Oyetola, the Osun APC governorship candidate, represents.”

The committee also assured that logistics to ensure hitch-free outing had been perfected.

“The Osun chapter of All Progressives Congress (APC) invites party faithful and all lovers of democracy and good governance to the Grand Finale of Governor Adegboyega Oyetola’s re-election rally in Osogbo, the state capital,” the statement said.

She also said the rally which holds at the Osogbo Township Stadium Tuesday, would have in attendance top party leaders.

“Leaders and chieftains of the APC, including the Vice-President of the Federal Republic of Nigeria, Prof Yemi Osibajo, members of the Central Working Committee, National Campaign Council, APC Governors and other national and regional structures of the Party are expected at the rally in support of Mr Adegboyega Oyetola, the party’s candidate in the Osun governorship election.

We trust that members of the APC will show the formidable strength and decorum the party is known for, even as we implore all residents and citizens of Osun to come out en-masse and in public acclamation of their overwhelming support for the APC candidate,” the committee said.

Meanwhile, the Inspector General of Police Usman Baba has ordered the deployment of Deputy Inspector-General of Police in charge of the Force Criminal Investigation Department (FCID) Johnson Babatunde Kokumo to supervise the Saturday’s governorship election in the state.

The police would today at a meeting in the state address stakeholders on the need for a peaceful conduct of the election.

The spokesperson further disclosed that adequate police personnel from the rank of Chief Superintendents of Police (CSPs) and below have equally been deployed for the election.

“DIG Kokumo is responsible for overseeing the implementation of the Operation Order evolved from the Election Security Threat Assessment, to ensure a peaceful and conducive environment devoid of violence and to guarantee law abiding citizens in the state of a secured space to freely perform their civic responsibilities without molestation or intimidation.

“Other senior officers deployed are tasked with coordinating human and other operational deployments in the three Senatorial Districts, 30 Local Government Areas and the 3,753 polling units in Osun state.

Adejobi further said: “The IGP, who is billed to meet with stakeholders in Osogbo on Tuesday, July 12, 2022, emphasized that these necessary operational deployments are part of actions aimed at creating a conducive and enabling environment that will guarantee peaceful and proper conduct of the Osun Gubernatorial election.