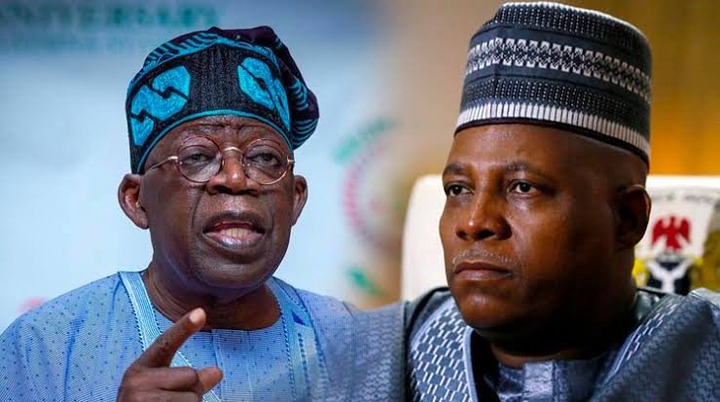 The presidential candidate of the All Progressives Congress, Asiwaju Bola Tinubu, shunned North-West governors demand and refused to bow to the pressure of picking one of them as his running mate by choosing Senator Kashim Shettima as his vice president candidate.

Tinubu confirmed Shetima, as his running mate for 2023 presidential election after meeting with President Muhaamdu Buhari in Daura, Katsina State on Sunday.

It was learnt that one of the causes of the delay in selecting a running mate was the refusal of Zulum to accept Tinubu’s offer.

According to PUNCH, top sources revealed that Tinubu had offered Zulum the ticket on a silver platter but he refused to take it.

An associate of Tinubu who wished to remain anonymous, said, “Based on wide consultations as well as a survey, Zulum was the most popular option. He was repeatedly offered the ticket but he turned it down for two main reasons. The first was that he was eager to complete his tenure as governor of Borno State and implement his reconstruction programme.

Secondly, his loyalty to Shettima was also a factor. Zulum was Shettima’s commissioner when he handpicked him as his successor in 2019. They have maintained a cordial relationship which is rare between governors and their predecessors. Zulum finally stated that he would only accept the VP slot if Shettima asked him to take it.

“But it was difficult for Tinubu’s men to ask Shettima to plead with Zulum to take the job when it was obvious that Shettima also wanted the job. With INEC’s deadline fast approaching, Shettima became the sure option. In any case, Shettima’s loyalty to Tinubu has never been in doubt. So, it became easy to settle for him.”

This publication recalls that six North-West All Progressives Congress governors had demanded the position of vice president ahead of the July 15 deadline set by the Independent National Electoral Commission (INEC).

One of the governors, who was said to have been interested in the position was El-Rufai, one of the biggest advocates of the Muslim-Muslim ticket having successfully implemented it in Kaduna State.

However, El-Rufai’s frosty relationship with the Christian community was said to have discouraged Tinubu.

Kano State Governor Abdullahi Ganduje could also not be considered despite his closeness to Tinubu because of the party crisis in his state that had contributed to the popularity of Senator Rabiu Kwankwaso and the New Nigeria Peoples Party.

It was learnt that associates of Governor Simon Lalong of Plateau State, who is also the Chairman of the Northern Governors’ Forum, had reached out to Tinubu with a view to ensuring that he gets the ticket since he is the only northern Christian governor in the APC.

However, Lalong’s popularity in the North was said not to be strong enough to boost Tinubu’s chances.

Speaking with The PUNCH on Sunday, federal lawmaker, James Faleke, founder of the Tinubu Support Group, said picking Shettima was a master stroke.

Faleke said the streets of Borno had been agog with celebrations since the former governor was announced as the Vice-Presidential candidate of the APC.

“The thinking behind it is who will deliver? It is not about religion. The entire Borno is rejoicing over his choice as VP. He is very popular. Even Governor Zulum has thanked Tinubu,” he said.