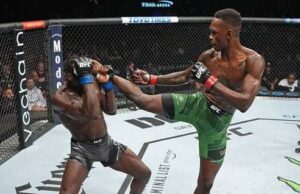 Adesanya controlled the fight in four out of five rounds.

Cannonier did his best but he simply wasn’t on the same level as Izzy. It was therefore an unanimous decision for ‘The last Stylebender’.

The Nigerian-born New Zealander’s only loss was during his unsuccessful step up to light heavyweight, losing to then-champion Jan Blachowicz.

On Sunday, he successfully defended his middleweight title for the fifth time.

While Adesanya defeated Robert Whittaker in February for the second time to retain his middleweight strap, Cannonier knocked out Derek Brunson in the second round in February to become the weight’s No.1 contender.