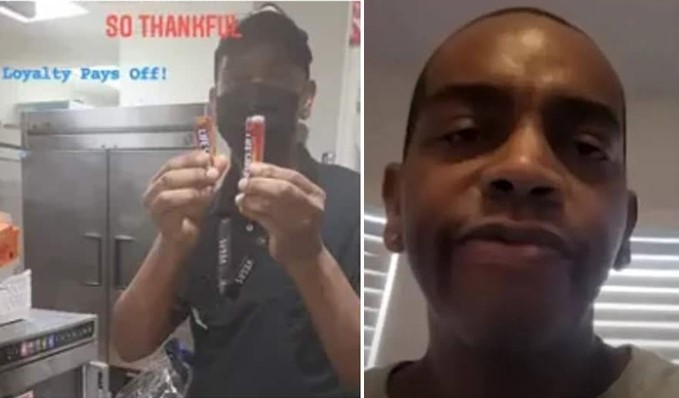 A man named Kevin Ford worked for Burger King for 27 years and never missed a day of work until his retirement.

During his last days at work, his employer rewarded him for his years of loyal service with a gift bag, which included one movie ticket, a bag of candy, a Starbucks cup, a couple of pens and plastic backpack.

The 54-year-old man’s daughter, Seryna took to social media to reveal the parting gift her dad got and he went viral.

She decided to set up a GoFundMe page to appreciate him for managing to provide for his family and put four daughters through college with decades of hard work.

Ford’s daughter Seryna explained she didn’t have high expectations, and her “original goal was $200.”

The father and daughter appeared on Today and he spoke on how overwhelming it was for him.

“It’s like a dream, a dream come true, that nobody can even think of this. It’s just overwhelming.

“I just want to tell everybody out there, thank you for every cent, even the thought of watching the video,” Ford said. “There’s been donations from Australia and U.K. all around the world…I just want to say thank you to everybody. It’s just a dream come true and just a whirlwind of love,” Ford said.