Justice Tanko Muhammad was forced to resign as the Chief Justice of Nigeria, multiple sources on Monday told SaharaReporters.

There have been several reports that he resigned on the grounds of ill health but the sources said it wasn’t a voluntary action as he was forced to leave office. 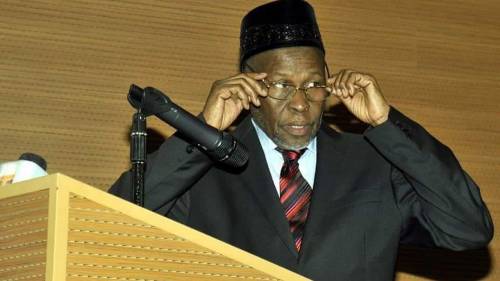 SaharaReporters learnt that corruption allegation against one of his sons was one of the reasons why he had to resign.

The son was said to have accepted a $10 million bribe from former Governor of Sokoto State, Senator Aliyu Wamakko after promising to procure judgement for him on an election matter that didn’t later materialise.

However, the details of the election matter were sketchy as of the time of filing this report.

In May, Wamakko emerged as the candidate of the All Progressives Congress for Sokoto North senatorial district.

The former governor is going for a third term in the Senate.

“The CJN was forced to resign, He didn’t voluntarily resign. He was unaware when he got to the office this morning that he would be leaving.

“He was expected to declare open a workshop this morning at the NJI (National Judicial Institute). He was preparing for the conference when he read it somewhere that he has resigned.

“The Presidency cabal waited to boot him out after Mary Odili retired. It is part of their plans for litigation ahead 2023 elections.

“There is also an allegation against one of his sons used to force him to resign. The son took $10 million from former Governor of Sokoto state, Wamakko to procure judgement for him on an election matter that didn’t materialise.

“Wammako was angry and raised an alarm over the matter. This really embarrassed Tanko and he paid back some of the money, which was a large sum. He was questioned by the cabal where he got the money to pay Wamakko from,” one of the sources told SaharaReporters.

President Muhammadu Buhari is expected to swear in Olukayode Ariwoola, who is the second most senior Justice in the Supreme Court later in the day as acting CJN.

He was appointed a Judge of the Oyo State High Court in 1992 and later made a Justice of the Court of Appeal in November 2005.

A source however told SaharaReporters that the Iseyin-born jurist has a terminal illness.

“Do you know that Ariwoola is ill as well? He may leave soon on health grounds. That’s even if they send his name to the Senate for confirmation,” the source said.

“We pray he grows very old but because of his ill health, he may end up acting for a few months.”

SaharaReporters in October 2021 exposed a plot by some Aso Rock (Presidential Villa) cabal members to remove Muhammed over his style of leadership in the judiciary.

He was appointed as acting CJN on January 25, 2019, following the suspension of Justice Walter Onnoghen.

Onnoghen, who was appointed in 2016, was removed after corruption allegations were levelled against him.

But in March 2021, Onnoghen, speaking at a book launch ceremony he attended with his wife, disclosed that was removed from office over a false allegation that he held a secret meeting with former Vice President, Alhaji Atiku Abubakar, in Dubai, United Arab Emirates, before the 2019 general elections.

Muhammed was sworn in as a substantial CJN on July 24, 2019, with loads of expectations that include doing the bidding of the cabal members and ruling All Progressives Congress.

SaharaReporters, however, gathered that the grouse of members of the Aso Rock cabal against him was that he had been too slow to do their biddings.

“They are planning on removing the current CJN. He is expected to retire in 2023 but they are not happy with him. They said he’s too slow to do their biddings,” a top source had told SaharaReporters at that time.

“Since Onnoghen was removed for him, clearly the cabal behind his good fortune had expectations of him which they think he is not delivering as anticipated.”

On the 2021 raid of Justice Mary Odili, wife of a former Governor of Rivers State, Peter Odili, another source had said, “Regarding the raid on Odili’s House, it was planned because they don’t want her to become the next CJN. Though she’s retiring in about six months, that is like six years to the cabal. They are planning to remove Tanko Muhammad before then and don’t want the woman to even act as CJN for one day.

“The most senior Justice after Odili is Olukayode Ariwoola but they claim he’s got a terminal illness. He is expected to retire soon on health grounds. The fourth most senior of the Justices who could take over as CJN is Musa Dattijo Muhammad, another Northerner from Niger State. He is also expected to retire in 2023.

“They accused Odili of being a PDP (opposition party – Peoples Democratic Party) judge and that her husband helps to fix lots of judgements at their home in Abuja. That was why the husband was also embarrassed recently.

“They want to force Tanko out soon and don’t want the woman to replace him. They considered her too close to the PDP, so they have to embarrass her to ensure she doesn’t get to replace him at all.”