Lionel Messi and his wife Antonela Roccuzzo appeared in good spirits as they enjoyed a yacht trip alongside Cesc Fabregas and his wife Danielle Semaan in Ibiza on Monday. 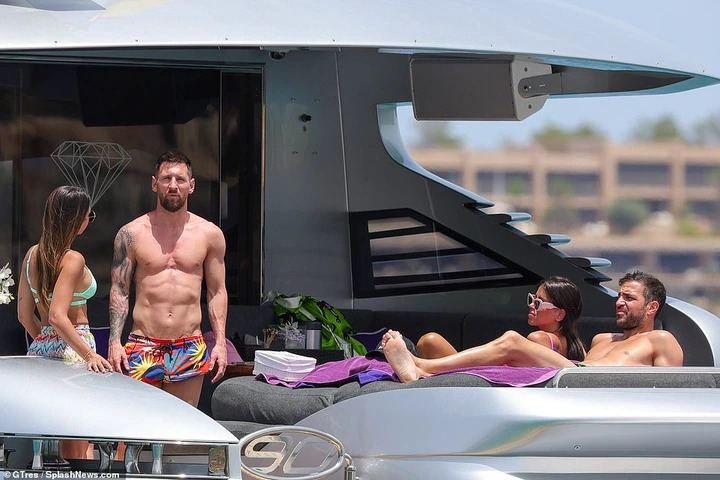 The Argentinian footballer, 34, put on a loved-up display with his partner, 34, as they wrapped their arms around each other while soaking up the sun on board.

Lionel showed off his toned physique in a pair of multi-coloured patterned swimming trunks.

His wife Antonela displayed her jaw-dropping figure in a light green bikini that highlighted her washboard abs.

The mother-of-three wore her brunette locks in a poker straight style while she also sported a pair of sunglasses.

Antonela also donned a patterned mini skirt for the trip where she was seen relaxing on the edge of the boat while working on her tan.

Cesc, 35, who was recently confirmed to be leaving Monaco at the end of this month when his contract ends, sported a pair of green swimming trunks with a floral print.

The footballer looked on cloud nine as he relaxed alongside his wife Danielle, 47, who donned a fuchsia two-piece that highlighted her incredible figure.

She also opted for a pair of white denim shorts and a pair of chunky sunglasses, while she let her tresses fall loose down her shoulders.

Ibiza is a regular holiday destination for Messi and his family, with the footballer heading their in recent years with his Barcelona teammate Luis Suarez.

It comes after Monaco confirmed that midfielder Cesc will leave at the end of the month when his contract expires.

The Spaniard joined the French outfit from Premier League side Chelsea in January 2019 but has struggled with injuries this season at the Stade Louis II.

Hamstring and ankle issues as well as a bout of coronavirus have contributed to the former Arsenal and Barcelona star making just two league appearances and playing in one Europa League game in 2021-22.

The club have confirmed he will depart the club after three-and-a-half years, writing: ‘The midfielder with more than 830 career games, whose contract is coming to an end, leaves the Principality club three and a half years after his arrival.’

There has been speculation this season that he could announce his retirement, but the 2010 World Cup winner previously denied those reports, and that he had a few contacts with other teams but that the ‘level of the club might have to go down’.

Although in another interview last month the Catalan revealed that he would leave Monaco at the end of the season.

Speaking to So Foot, Cesc confirmed he does not want to finish his playing career like this because ‘this year has been so bad’, despite claiming he has already been called by his former bosses to see if he wants to join their coaching staff.

Asked if he could stay put at his current club, Cesc said: ‘No, it’s sure that it’s over between Monaco and me.

‘To be honest, I’ve already had two or three phone calls in the past two weeks from some of my former coaches to find out what I wanted to do, to see if I wanted to join them this summer as a coach.

‘But this year has been so bad that I can’t finish on that. Not after building this career. I want to keep playing. I’m grateful for the career I’ve had, but I don’t feel like it’s over.’

Cesc has played in three of the five major European leagues during his career, but said he is ‘open to anything’, as long as he feels mentally right at any prospective new club.

‘I’m open to anything, I just want to have fun,’ Cesc added. ‘The place doesn’t really matter, it’s more my head that counts.

‘When I’m fit I feel really good, when I’m training with my team-mates I don’t feel any different when it comes to passion for the game.’