Legendary Nigeria defender Taribo West has disclosed has blamed hotel romps for the reason behind their 1998 World Cup defeat against Denmark. 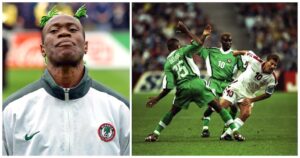 The Super Eagles had upset the odds to top their group with six points from three games ahead of Spain, Bulgaria, and Paraguay. The three-time African champions were paired against group C runners-up Denmark in the round of 16.

But despite being favourites ahead of the clash against the Danes, the Super Eagles surprisingly put in a lacklustre performance as they bowed out as 4-1 losers.

West, who started and played the full duration of the game, revealed Nigeria’s confidence and popularity became a curse as his teammates became complacent.

According to the former Inter and AC Milan defender, some of his teammates sneaked women into their hotel rooms a night before their round of 16 clash against Denmark in France. He told Nigerian publication The Punch, quoted by Daily Mail:

“I read reports about Eagles visiting nightclubs and driving limousines during the World Cup in France, honestly I don’t know about that.

“But what I know is that some players sneaked women into camp, I saw that. “The women were Africans who came to watch the tournament and fell in love with our team, because of the way we played in the group stage. “So, it was easy for these players to woo them to their rooms. That is why on match day, you could see a lot of the players didn’t have the strength to curtail the Danish players.

They were tired after overworking themselves the night before with the women.

I was yelling at them on the pitch, I was very angry with them. They did all these because they thought we were going to beat Denmark.” Nigeria’s popular ’98 side included worldwide stars such as Bolton ace Jay-Jay Okocha and former Arsenal striker Nwankwo Kanu. Despite being overwhelming favourites against Denmark, the Super Eagles crashed out at the last-16 stage and have since never gone further in subsequent World Cups. Denmark meanwhile lost 3-2 to eventual finalists Brazil in the next round, before Zinedine Zidane starred in a 3-0 win for France in the final to help claim the trophy on home soil.