Home POLITICS Akpabio’s Decision To Step Down For Tinubu, Gave Us Victory – Sanwoolu 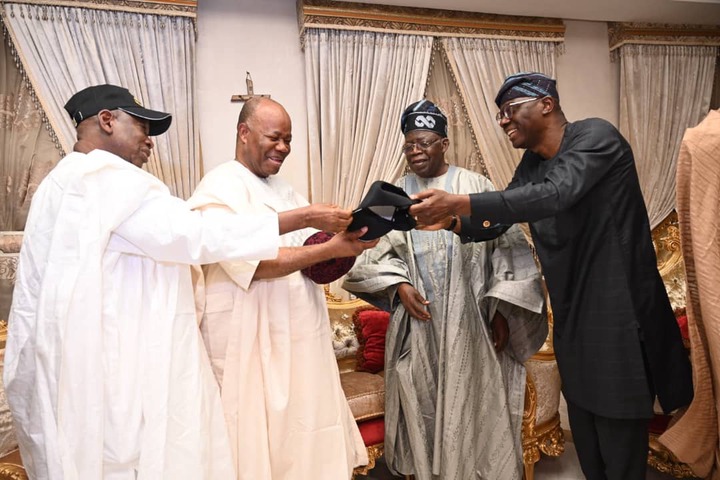 Sanwoolu stated this while speaking on behalf of the Presidential candidate of the party, Asiwaju Bola Ahmed Tinubu, when he paid a thank you visit to the former governor of Akwa Ibom State, at his Abuja residence. On the Asiwaju’s entourage was also the Kano State Governor, Dr Umar Ganduje.

According to Sanwoolu, “we are here today to show our appreciation for what you did for us at the just concluded presidential primary of our great party, where you stepped down for our leader and also directed your delegates from Akwa Ibom State and other states to cast their votes for Asiwaju, that action was the game changer.”

He stated further that,” that decision of yours to step down for Asiwaju, opened the flood gate for other aspirants to step down, which made it possible for Asiwaju to win the presidential ticket. It was a decision that set the tone for the convention and that is why we are here today, to say a big thank you for that selfless action.”

Earlier, Akpabio said he was humbled by the visit of the presidential flag bearer, saying,” Your Excellency, I am humbled by this visit. I have heard several comments about my decision to declare my support for our leader, Asiwaju Bola Ahmed Tinubu. I took that decision in the interest of the party and the need to further support the decision of the Northern Governors who had earlier, decided that the position of the President of Nigeria be zoned to the Southern part of the country.”

“Like I said in my speech at the convention ground, I will do all within my powers to support and work for the success of the APC in all the elections. My action was purely in the interest of the party, the south and our dear country. It was also meant to ensure the continued unity of the country before, during and after the elections,” he stated.