Home GOSSIP Organisers Of Headies Award Shows Off ‘Bentley’ That Next Rated Winner Will...

HEADIES 2022 : This year’s Next Rated winner will walk home with 2022 Bentley Bentayga worth over N300 million. 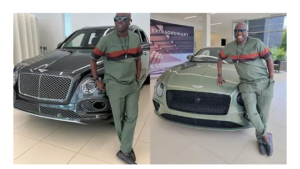 The 15th edition of the Nigeria’s music award will hold on July 12 at the Cobb Energy Centre, Atlanta, United States of America.

Ahead of the 2022 Headies Award, the Executive producer of the Headies Awards, Ayo Animashaun, has showed off the top prize that this year’s winner of the coveted Next Rated category would be walking away with.

Photos shared on his Instagram page showed Ayo Animashaun at Bentley Atlanta dealership as he checks out some of the Bentley cars on display, including a Continental GT and a Bentayga Sports Utility Vehicle (SUV).

votes, not wishes, not magic.”

Animashaun at a press parley in Lagos in March had announced that the winner of the coveted Next Rated category would be walking away with a brand new 2022 Bentley Bentayga SUV.

The Organizers of the Headies Award also revealed that the 15th edition of the Nigeria’s music award will hold on July 12 at the Cobb Energy Centre, Atlanta, United States of America.

The year’s 15th Headies award show will be hosted by Nancy Isime, with performances by dancer, Kaffy, and singer Goya Menor.

The Headies, originally known as the Hip Hop World Awards, was established in 2006 to celebrate artistes’ outstanding achievements in the Nigerian music industry.

At over N300 million, the ultra-luxury Bentley Bentayga is one of the most expensive truck money can buy, going head-to-head with British made rivals like the Rolls-Royce Cullinan SUV and Range Rover SV Autobiography.

There is also a high-resolution 10.9-inch touchscreen, wireless Apple CarPlay and Android Auto, USB-C outlets, and a bigger and faster tablet for the rear seats passengers.