Carlo Ancelotti claims Liverpool were the easiest team to prepare a game-plan for during the knockout stages of this season’s Champions League. The Real Madrid manager etched his name further into the folklore of Europe’s premier club competition after masterminding the Spanish side’s improbable success that culminated in last night’s 1-0 win in Paris. 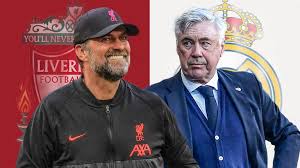 Real’s run to Stade de France had previously been characterized by a series of miraculous acts of escapology against the likes of Paris Saint-Germain, Chelsea and Manchester City.

Ancelotti, however, claimed Liverpool’s defined style, based around a 4-3-3 formation, their high defensive line and relentless pressing game made them straightforward opponents to counter.

I completely agree with Carlo Ancelotti. I said this before, that the UCL will be determined by coaching expertise. Jurgen Klopp is highly predictable. Recall that he has played three finals this season, and didn’t score any goal in the three of them. His team pattern has been largely predictable if you are a reputable coach.

If it were not the uncertainty of penalty shoot out, Chelsea understood this pattern predictability, and that’s why the Reds could not score against Chelsea in the two finals. Carlo Ancelotti is a reputable manager. He read the game.

I always maintain that it’s easy to play Liverpool once you don’t give them space to run into at your back, because they have very fast front players. Once they don’t see that space to run into, then you have crippled them.

This is why chelsea were able to play them twice at Wembley without conceding any goals. You have to move your defense closer to your goalkeeper with no space to run behind. Then, they get frustrated and will stay shooting from outside.