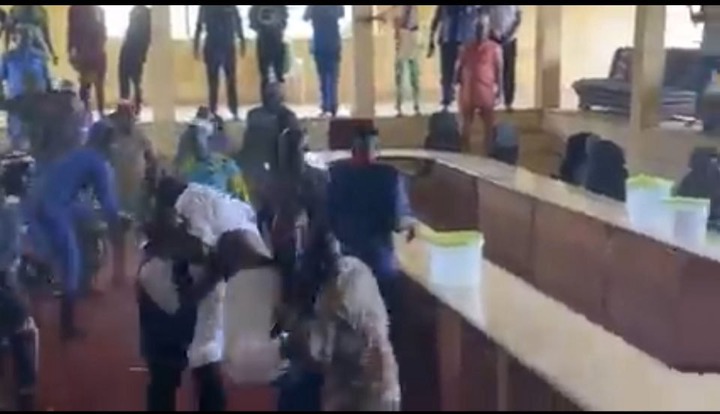 The Primary Elections of the People Democratic Party (PDP) in Oyo State turned out to be a game of thrones between two brothers with different interests.

The two brothers, Engr. Najeem Omirinde, immediate Chairman Oyo State Rural Water And Sanitation Agency (RUWASA) and Hon. Sarafadeen Omirinde, Chairman Saki West Local Government, had what can be likened to a political difference where the local council chairman is supporting the chosen/consensus candidate of Senator Hosea Ayoola Agboola (Halleluyah) against his blood and biological brother, Engr. Najeem Omirinde who is aspiring to become the House of Representatives candidate of the party in Saki West/Saki East/Atisbo Federal Constituency.

Arising from the video, an investigation of the video being circulated on social media revealed that, the three aspirants of the party in the federal constituency; Dr. Lukman Adamawa, Barr. Sharafadeen Onijo and Engr. Najeem Omirinde have before now consulted to agree on a consensus arrangement to pave a way for a candidate, but which such was not allowing to see the light of the day, and all agreed to go for the Primary Elections.

On the Primary Elections Day

While at the Primary Elections, it was observed that, Dr. Lukman Adamawa’s name was omitted on the ballot, and that call for the reprinting of the ballot papers for the purpose of the election.

While doing that, there was a protest from Engr. Najeem Omirinde that, the election should proceed with Dr. Lukman Adamawa’s name omitted, as that indicates that, he has been booted out of the race.

From finding, yes, he does. And reason why his name was omitted on the ballot is not known to anybody as such an omission is very uncommon in electioneering process.

According to reports, after the reprinting of another ballot paper for the election and the conduction of the Primary Elections as designed, directed and stipulated by electoral law which was keenly supervised INEC.

The election was said to have produced Dr. Lukman Adamawa, whose name was first omitted for the federal constituency.

Not pleased with the process and the results, Engr. Najeem Omirinde was seen walking towards the Saki West Local Government Chairman, Hon. Sarafadeen Omirinde, who is supervising the process. His move was clearly shows in the video as he was trying to snatch ballot paper.

The local government Chairman, Hon. Sharafa Omirinde first attacked his brother, and order his supporters to beat and boot him out of the election venue, an act highly condemnable by many people present there.

There is no doubt that, the ugly political developments is very unusual, and it will be a lifelong fight not only between the two, but between the two immediate families and even beyond.
One thing the two failed to know is that, politics will stop tomorrow, are they going to continue living as a brother and maintain the family ties?