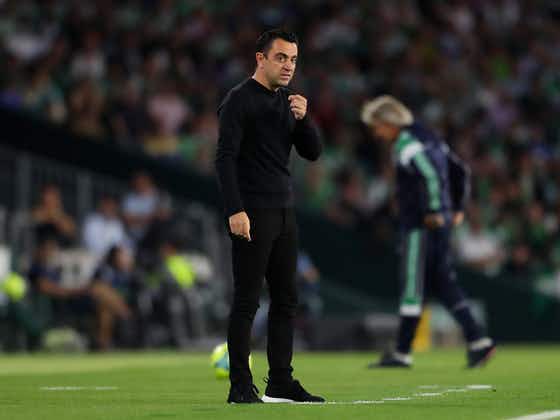 Barcelona achieved one of their main objectives of the season as they secured qualification for the UEFA Champions League next season by beating Real Betis 2-1 at Estadio Benito Villamarin.

The Catalan giants were unable to break down the hosts up until the 76th minute when academy ace Ansu Fati, making just his second appearance after a lengthy injury layoff found the back of the net to hand Xavi’s men the lead.

However, Real Betis struck back in almost no time through Marc Bartra. The game looked all set for a 1-1 stalemate until Jordi Alba produced a stunning moment of magic deep into stoppage time to win it for Barca.

The victory ensures that the Blaugrana will play in European football’s elite competition next season, which left manager Xavi relieved and thrilled.

“We have achieved the most important goal. When they signed me in November, they told me that the goal was to qualify for the Champions League this season. We did it in a few months. The season could have been a lot worse,” he said.

“We’re in the Champions League again. We’re looking to find solutions for everything. Sporting and economically.”

Talking about Saturday’s game, Xavi said: “It’s been a complicated season. We haven’t played well everytime, but today we showed our fighting spirit again. Now we’re in second place. But we have to play better.”

“This was a very important match. We have lost some easy balls and not dominated in some aspects. But we’re on the right track. I’m not happy with the performance, but I am with the result.”

On the progress the team has made since he took over in November, he said: “Go back to November and analyze our situation. We are satisfied with our progress. We’ve beat good rivals, played excellent football at times.

“However we have declined, but we’re still competitive. February and March were excellent. Since then, we have not been playing as well.”

“We’re not playing like we used to, we lose balls and a negative feeling is transmitted but the positive, although we’re inconsistent is that the players don’t give up,” he added.

The Barcelona manager spoke highly of his goalscorer on the night, Ansu Fati, stating: “Ansu Fati is a star. You can tell. We are so happy for his return. Give Ansu Fati half a chance and he will score. He’s got the star in him.”

Xavi also reserved some praise for his senior players like Jordi Alba and Sergio Busquets, saying: “I have said several times that the captains lead and know their responsibility. Alba suffered, Busi too and I’m delighted to see them.”

Xavi once again touched upon the fact that when he took over, there was little hope of qualifying for European football. Having achieved the objective, he insisted that Barcelona cannot go another season without challenging for titles.

“In November, we were 9th placed. Not only the Champions League was in danger. It looked like we could even miss out on the Europa League. The change that we have done is clear.

Up next for Barcelona is a home game against Celta Vigo, following which they face Getafe (away) before closing the season at Camp Nou versus Villarreal.