Real Madrid boss, Carlo Ancelotti has opened up on the reason behind Gareth Bale’s absence during the club’s celebration of their La Liga title. 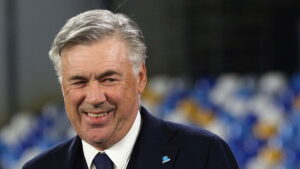 A few days to their Champions League semi-final victory over Manchester City, the Spanish giants were confirmed La Liga winners with 5 games to spare.

However, Bale missed out on Real Madrid’s incredible week and their celebrations.

When Ancelotti’s Los Blancos celebrated the LaLiga Santander title and their Champions League comeback against Manchester City, Bale was nowhere to be seen.

And during his prematch press conference on Saturday ahead of the league tie against Atletico Madrid, the Italian coach was asked if the forward is distant from the rest of the squad.

“He [Bale] wasn’t there because he couldn’t move, not because he is distant,” Ancelotti replied in his Saturday press conference.

“All the players care about Bale and he cares about them, but he wasn’t there because he couldn’t be there.

“He had a back problem and it’s difficult to move when that happens. I know. It has happened to me.”