Home SPORTS Peter Drury Was At His Poetic Best When The Final Whistle Blew... 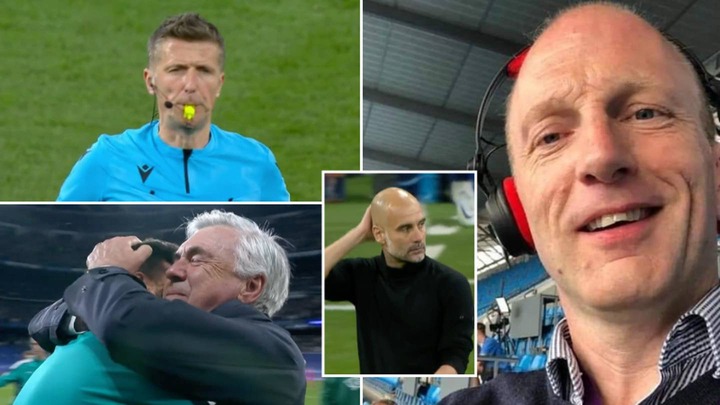 Peter Drury, a man known by many as the most articulate commentator in the business, once again proved his skills on the mic with a poetic masterpiece in the aftermath of Real Madrid‘s dramatic Champions League win against Manchester City.

Here is Drury in action below. How good is this?

It was a historic night at the Bernabeu. After a 73rd minute strike from Riyad Mahrez put the visitors 5-3 ahead on aggregate, it looked like Pep Guardiola’s side were destined to come up against Liverpool on Saturday, May 28 at the Stade de France in Paris.

But in a quite remarkable turn of events, Madrid forward Rodrygo scored two goals in the final minutes before Karim Benzema sent Ederson the wrong way from the penalty spot in extra-time to send Los Blancos to the final in an instant classic.

Oh, and if you fancy hearing more of Peter Drury and his wonderful lines on commentary, then check out his reaction to Rodrygo’s 91st minute equaliser below. “They prayed for miracles and miracles have arrived. Real Madrid, the team of dreams!”

It really was Bernabeu bedlam.

And after producing comebacks against Paris Saint-Germain and Chelsea in previous rounds of the competition, Los Blancos will be hoping to cap off one of the most remarkable Champions League campaigns against Jurgen Klopp’s Liverpool later this month.

On the subject of Peter Drury – from screaming “GOAL Bafana Bafana! Goal for South Africa! Goal for all of Africa!” after Siphiwe Tshabalala scored a screamer at the 2010 World Cup, to describing Kostas Manolas as ‘The Greek god in Rome’ when the defender’s netted a later header to knock Barcelona out of the Champions League on away goals.

The 54-year-old is responsible for some of the most iconic pieces of commentary in football history. Remember this?

And this from back in April, as Liverpool and Manchester City emerged from the tunnel ahead of a potential decider in the Premier League title race.