Nollywood actor, Yul Edochie, broke the internet a moment ago when he revealed he welcomed a child with his colleague, Judy Austin.

The news surprised everyone, especially his supporters, who had been gushing about his marriage to his wife of 17 years, May.

In no time, Nigerians trooped to the Instagram page of Yul’s new wife to drag her filth. However, this led to a more interesting discovery.

A quick check on Judy’s page showed she had repeatedly posted the actor who she often described as director extraordinaire as far back as 2019.

In some posts, she described Yul as a director extraordinaire, and in another she called him her person. Netizens also dug out Yul’s response to one of her posts, where he called her “her excellency.”

See some screenshots below, 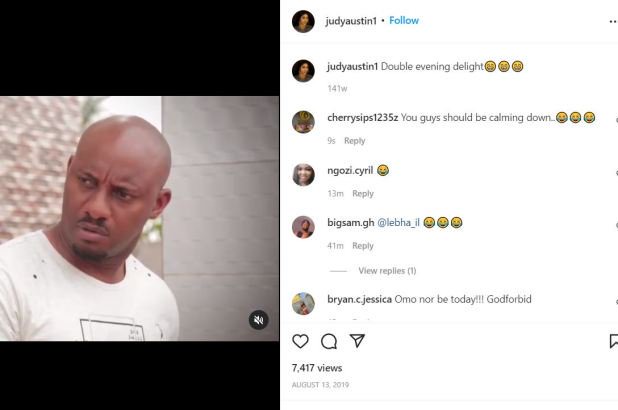 See some comments below,

@king_patra1, “We didn’t know then this was a second wife supporting the husband she snatched”.

@chimyman4, “Nd we don see all these posts o but we never suspect anything since. Omo our VAR no do good job on this”.

@beauty_atabs, “God hear the cry and wipe the tears of that innocent first wife. It is well in Jesus name.”

@natty_viv, “They fell in love in the set 😂😂😂😂😂 nollywood and sodom and gormorra”.

@okies_bae4, “How did the wife not see all these”.