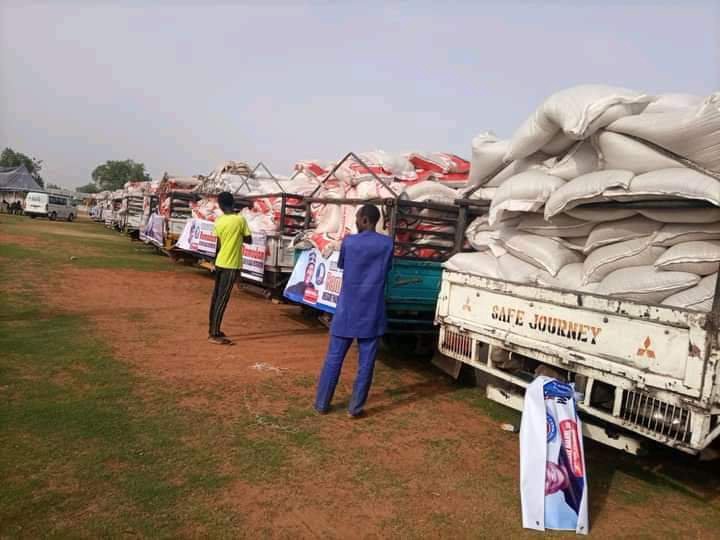 Minister of Justice and Attorney General of the Federation, Alhaji Abubakar Malami has distributed over 17,500 bags of foodstuff to the less-privileged across 21 local government areas of Kebbi State.

The News Agency of Nigeria (NAN) reports that the foodstuff, which was distributed through Khadimiyya Foundation, an NGO, founded and funded by the minister included; rice, sugar and millet.

Flagging off the distribution at Haliru Abdu Stadium, Birnin Kebbi, the state capital on Saturday, Gov. Atiku Bagudu described the gesture as a right step in the right direction.

Bagudu, who was represented by the Secretary to the State Government (SSG), Alhaji Babale Umar-Yauri, advised other political office holders, elected officers and well-to-do Nigerians to borrow a leaf from the Attorney General with a view to reducing hardship amongst less-privileged persons.

“It is very important for elected and political officer holders to use what they earn to assist the downtrodden,” he advised.

In his speech, Nigeria’s justice minister said humanitarian gesture of this nature had been going on silently over the last seven years with the consent and support of President Muhammadu Buhari and Gov. Atiku Bagudu of Kebbi State.

Malami said he decided to make the gesture public due to consistent advice from associates as well as Islamic scholars who suggested that it was not wrong to publicise good deeds for others to emulate and not for pride.

Quoting a verse from the Holy Qur’an, the minister said those who feed people secretly and openly would definitely earn the reward of their action from Almighty Allah.

He recalled that in recent past, he drilled 236 boreholes across the state, assisted over 2,800 traders with start-up capital and over 500 people benefited from the CBN/FG support scheme.

The minister prayed that the gesture would be a path to earn Jannatul Firdus (highest paradise) in the hereafter.

Alhaji Sa’idu Dakingari, a former Governor of the state appreciated the minister for what he described as a gigantic gesture worthy of emulation by all political office holders.

He charged the committee saddled with the distribution of the items to be just and fear their creator in the discharge of their duties.

In a remark, the State Commissioner for Local Government and Chieftaincy Affairs, Alhaji Hassan Shalla assured that the gesture by the minister was not the first of its kind in the state.

He said the gesture was part of the magnaminity of All Progressives Congress (APC) from the federal to local government level.