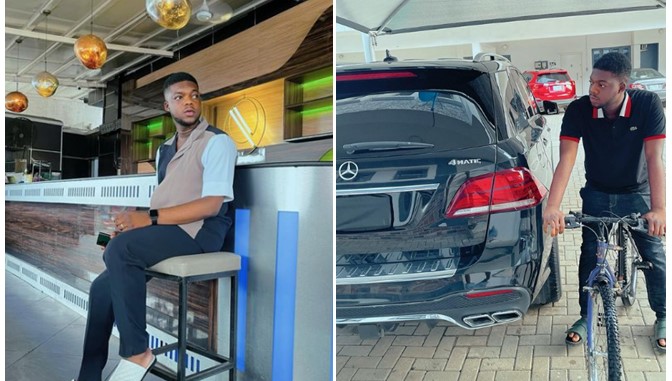 Popular Nigerian comedian, The Cute Abiola has announced the purchase of a brand new Mercedes Benz for himself.

The skit-maker took to his Instagram page on Thursday to show off the newly acquired expensive whip.

Cute Abiola disclosed in his post that he bought the car after being compelled by depression.

Sharing a photo, he wrote;

Banky said the Grammy-winning singer revealed that he had the intention of setting up his own music label. He noted that he did not want to tie Wizkid down despite the fact that he had only released two solo albums as against the 5 in his contract.

His words; ”I called him one day and I said let’s talk, I told him that I am hearing too many things and you and I have a relationship where we can just talk about things. Tell me what you want, if you want to be off the label, I will never be the kind of person that would try to prevent you or sue you. Wizkid was right on the cusp of going bigger international. Wizkid then opened up and he feels like he wanted to set up his own outfit and do things his own way.

I said okay, if that’s what he wants, he’d get my full blessing. I will never try to tie you down or nothing like that.”