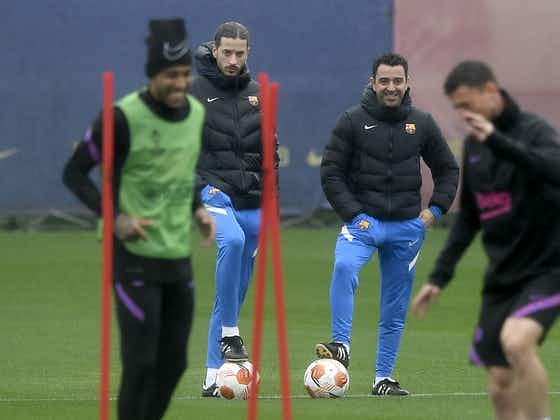 Following the unexpected elimination from the UEFA Europa League at the hands of Eintracht Frankfurt, Barcelona players are ready to give it their everything for the rest of the league campaign.

The Catalan giants saw their European journey come to an end last Thursday as they lost 2-3 in a game that was marred by the ticket scandal at Camp Nou.

Having had time to digest the defeat, the squad is now ready for the final run-in and have vowed to manager Xavi Hernandez that they will put in their best efforts for the remaining La Liga matches, reports Mundo Deportivo.

As things stand, Barcelona are second in the La Liga table with the likes of Atletico Madrid, Sevilla and Real Betis not far behind them. So, the top-four finish is far from certain at the moment.

And with eight matches remaining, the Barca dressing room has promised Xavi that they will do everything in their powers to help the club qualify for the UEFA Champions League at the earliest possible, as per the report.

Reports over the weekend had indicated that the Barcelona players had confidence that they can make an unlikely push for the La Liga title.

But Real Madrid’s comeback win against Sevilla on Sunday night has made that task much more difficult, even though the Catalans are still in with a mathematical chance to win the league crown next month.

There have even been speculations that Xavi and his staff felt that the players were suffering from mental exhaustion following a gruelling run of matches.

But, the players are set to put everything behind them and focus on the remaining eight matches in the league and regard them as eight finals, the report states.

Barcelona face Cadiz at Camp Nou later tonight in hope of bouncing back to winning ways as they look to end the campaign strongly.