Veteran actress, Shan George has recounted what happened after she tried to end her own life in the presence of her mother. 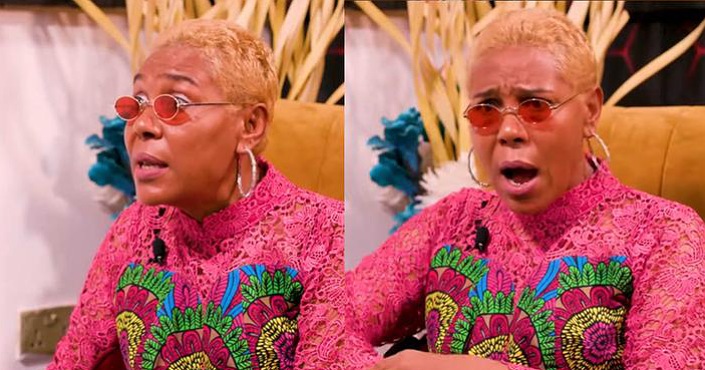 The ace actress shared her story during a recent interview with popular host, Chideity.

Shan George revealed that those days were the darkest days of her life and she badly wanted to end her life. However, something unexpected happened and made her change her decision.

“I was always broke, no money. When I do one small work and one little money is in my hand, before you know it, my mum can fall sick any minute. In and out of hospitals. Carrying her on my back so often actually gave me an injury which was what led to me doing a spine surgery like two years ago. I broke my back.

Carrying my mother on my back for all those years took a toll on my backbone and I had this spine issue. I will tell you I got to a suicidal point. When I was suicidal, I was so broke one day, one of my visitors from a long time had brought this shaving powder. I wanted to put it in the water and drink.

I told my mother that I’m going to kill myself because I’m tired, I’m frustrated. My mother said ‘okay, you’re not going alone. We have to go together.’ My mum said ‘yeah, bring it.’ It was in the night. So I took it to my mother. I was happy that at least two of us would go jeje because this life been tire person I no go lie.

So my mum took the shaving powder and the cup and the spoon and then she was pretending that she wanted to mix it. Then she paused and said ‘Wait oh. It’s night. It’s very late in the night. If we come go die for night now, go the other side, it will be dark. We no go see road oh.’ So she now said ‘let’s do it in the morning.’ I agreed.

When I was going to leave her in her room to go to my room, she called me back and said I should give her the mixture. That she would keep it there. So I gave it to her, she put it by her bed and said ‘first thing in the morning, come, so that when we go the other side, we can see road because you don’t know how that place will be.’ That’s how I went to bed that night.

(The next morning), first thing that woke me up was somebody I did a work for like two years ago. I didn’t have his number saved or anything. I saw the call the first time, I picked, didn’t know the number, tried to sleep again. Then the person called the second time and with that anger I said what is wrong with this person? I picked the call and then the person just started quarrelling.

“Ah ah, what is wrong with you? Your mother has been sick you could not call people. So you don’t even know that you have people that care and you can talk to.” I think he ran into one of my colleagues who told him that I didn’t live in Lagos anymore and had been in Calabar with my sick mother.

All the time he was shouting on the phone, I didn’t know who he was so when I now asked ‘Who is this?’, he now mentioned his name and I remembered that it was a man who we went for his father’s burial. (At the burial) my colleagues who had arrived didn’t have cups to drink with but there were cups from people who had left on other tables.

So I packed the whole cups and I went into the person’s kitchen (to wash them). So the person came into the kitchen and said ‘What are you doing in my kitchen?’ I thought he was angry so I was like ‘Ah, very sorry sir. My colleagues needed cups.’ He said, ‘No I’m not angry. I’m wondering what a superstar is doing washing cups inside my kitchen.’

So we both laughed it out and that was the end, I never saw the man again. I didn’t even know how to reach him. No phone number, no nothing. So when he reminded me on the phone who he was, it now occurred to me and I said ‘Oh, I’m very sorry sir.’ He now said “Send me your account, let me send you something. How is your mom?”

I said she’s getting better. My dear, in the next five minutes, my phone just did kpim kpim. I saw N1.5 million. I was confused. I took the phone to my mother and showed her. My mom said ‘is this from your account?’ I explained what happened. Mocking me, she now said ‘just send the money back, are we not going today?’ I said, ‘You and who? Go where? No oh. I’m going nowhere!’ (laughs).”