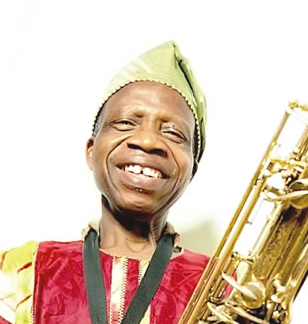 Veteran highlife musician, Orlando Julius Ekemode has died. The singer died on Friday, April 15, at the age of 79.

Bimbo Esho of the Evergreen Music Company Limited confirmed the death of the 79-year-old highlife singer.

In her eulogy, while announcing Orlando Julius’ death, Esho wrote;

“Bimbo Daddy has passed On…This was the message I stumbled on waking up at exactly 3am to peruse my WhatsApp page.. It was a message sent in to me by Orlando Julius beautiful and supportive wife Lady Latoya.

Orlando Julius a native of Ijebu Ijesha succumbed to the cold hands of death and breathed his last few hours ago at the age of 79.

We shall miss one of Nigeria’s fathers of Afro/Highlife Music , a gentleman and a fine Saxophonist. May daddy Orlando Julius soul journey well . To the entire Ekemode family may God give you the fortitude to bear this irreplaceable loss.”

Julius was a saxophonist, singer and bandleader. A native of Ijebu Ijesha, his musical career took flight in the 60s when Eddie Okonta invited him to join his band. Before then, he had been tutored by Highlife musician Jazz Romero. With Okonta’s band, Julius performed in many gigs and opened for the American trumpeter and vocalist Louis Armstrong. In subsequent years, he would play with other bands, including Hugh Masakela and opened for other high profile international acts. Julius also opened for the iconic American musician James Brown.

He released his first hit ‘Jagua Nana’ in 1965 and went on to tour West Africa. Julius formed the Ashiko movement and taught people his style of music although he did not stay in this position for long.

After spending some time in the United States, he returned to Nigeria in 1984. He quickly began recording tracks for the album Dance Afro-Beat, leading him to put together the 18-person Nigerian All-Stars band.