Arthur O Urso, from Brazil, hit headlines when he discussed his controversial marriage to nine women. 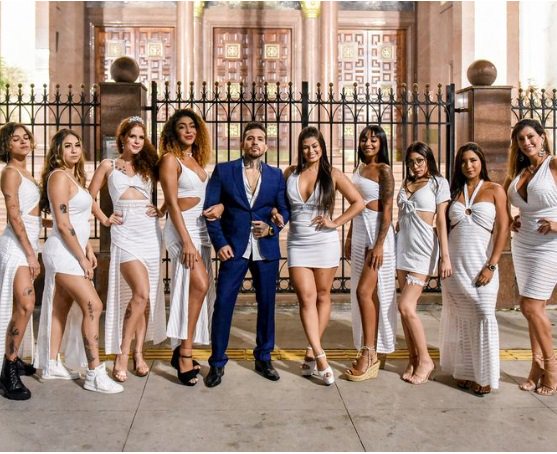 The man posing with his wives

A man who currently has nine wives has revealed his intention to marry two more wives, making it 11.

The man it was gathered married nine wives at once to celebrate free love.

According to him, he wants babies with all of his wives.

Arthur O Urso, from Brazil, hit headlines when he discussed his controversial marriage to nine women.

Now, after facing a divorce from one of the women, the model hopes to find two more ladies to marry.

Arthur said of Agatha’s decision to leave: “She wanted to have me all to herself. It didn’t make sense – we have to share.”

He added: “I was very sad about the separation and even more surprised by her excuse.

“She said that she was missing a monogamous relationship.

“My other wives thought her attitude was wrong and that she accepted the marriage for adventure and not for real feelings.

“I know I’ve lost a wife, but I’m not going to replace her at the moment.”

Now, with 8 wives, Arthur hopes to marry two more women to bring his total of wives to 10.

He admitted: “I have a dream – my wish has always been to have 10 wives. I only have one daughter.

“But I want to have a child with each one of my wives.”

He concluded: “The love I feel for each of them is the same.

“I think it would be unfair to only have children with one or two of them.”