Sunday Oliseh has emerged the favourite to land the Super Eagles job, according to Own Goal. 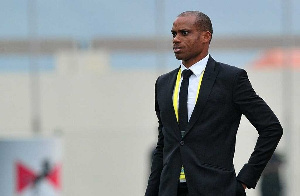 Austin Eguavoen was sacked by the Nigeria Football Federation (NFF) immediately after he failed to lead the Super Eagles to the 2022 World Cup in Qatar.

Eguavoen was dismissed alongside the coaching crew after Ghana played out a 1-1 draw in Abuja to book their place in the World, having failed to score in Kumasi in the first leg.

The NFF board and the Minister for Youths and Sports, Sunday Dare, reportedly met on Monday to discuss the failure of the Super Eagles to qualify for the World Cup.

And Oliseh, who has once handled the Super Eagles, is said to be the favourite of the minister.

However, the NFF are keen on having a foreign coach for the team and the sport site reports that a compromise could be reached in favour of the former Super Eagles captain