Former Super Eagles captain Austine Jay Jay Okocha says the coach of the senior national team of Nigeria Austine Eguavoen isn’t getting the best out of the duo of Alex Iwobi and Kelechi Iheanacho at the Africa Cup of Nations (AFCON). 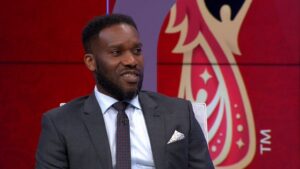 The duo started for Nigeria in yesterday’s 2-0 win over Guinea-Bissau with Iwobi playing on the right of attack while Iheanacho was deployed in the number ten role.

Okocha was in the studio as an analyst and he pointed out that Iwobi became more effective when he was moved to the number ten role insisting that Iheanacho isn’t fit for the role. He said he is better off as a striker.

“I’d like to see the coach play players in their right positions,” Okocha said on Super Sports.

“Iwobi became a better player when he took over the No.10 from Kelechi Iheanacho.

Iheanacho is not a typical No.10. He is a top finisher. I can understand why the coach is playing him in that position because he can convert a half chance.

“I am really impressed with the general performance of the Super Eagles against Guinea-Bissau despite playing the second team.

“This shows that Eguavoen is blessed with an array of talents that are capable of reaching the final if well utilized,” he rounded up.