Home POLITICS Tinubu Isn’t Perfect But The Crowd Behind Him Is An Indication That...

According to a report by Tribune, Former Deputy National Chairman of Peoples Democratic Party (PDP), Chief Olabode George, on Monday, said that his criticism of Asiwaju Bola Tinubu’s presidential ambition was not born out of vendetta or hatred for him as perceived in some quarters, but based on the need to ask the right questions and scrutinize those who were seeking public office in the interest of the nation. 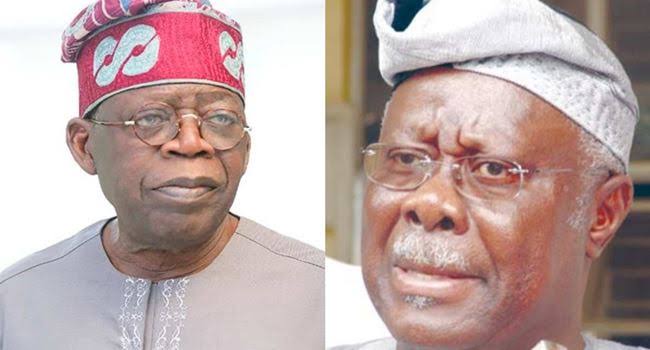 Chief George, who is also the Atona Oodua of Yoruba land, said this while speaking with newsmen at his Ikoyi, Lagos office, saying he meant well for Tinubu and the country, but quickly described his presidential ambition as a huge joke.

The truth is that Tinubu isn’t perfect but the crowd behind him is an indication that he is to some level, a trustworthy leader. The only thing many Nigerians against him right now is that he looks too old and unfit to handle the affairs of a complicated Nigeria efficiently. But even at that, many Nigerians would still wholeheartedly choose Tinubu over that brown-envelop crook that has nothing but money to throw around.

Whereas politics, should not be subjected to emotional narratives to humiliate, and score cheap political points. Politics and the advancement of men within a nation-state are too important to be subjected to such a fickle and dangerous trend. We cannot employ this tactic to build, sustain, limit, and regulate our society. We are heading for doomsday if this continues.

How, then, can we understand these links? This is the issue for most Nigerians because it is obvious that a lot don’t just get the kind of damage that is being done within our political space by using this. It was like that in 2014 running into 2015. The same thing in 2019 on all mass social media outlets, it was from one emotional blackmail to the other to humiliate, denigrate and lower the acceptability of one candidate for the other.

This is the same phenomenon: When one person looks really good, they then have an incentive in stopping that person from looking good, especially if they can’t compete. This manifests as suppressing someone’s credential and truth or work ethic, inferring ulterior motives for altruistic actions, implying real or imagined hypocrisy, attacking them on unrelated dimensions, or outright punishing them.