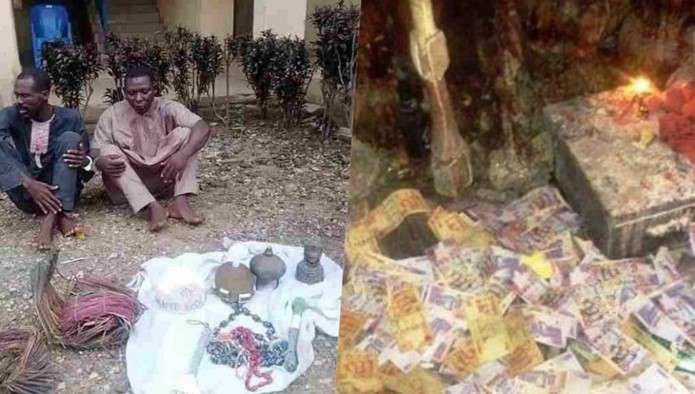 The Osun state Police Command has arrested two herbalists for allegedly killing a customer who came to them for ritual purposes.

The suspects confessed that they they murdered the client and used his body parts to do money ritual for themselves.

Faseun Afolabi, 40, said one 35-year-old Ayo approached him for money ritual, but according to him, he had not done it before.

He said he approached another herbalist friend, Fadare Afolabi, 38, who told him to use Ayo for their own money ritual.

“Ayo came to my place for a money ritual and I told him it’s hard but he insisted on it. I approached my friend, Fadare who told me that we can use the boy for our own money ritual.

Fadare called one man called Taye and he gave the boy one medicine. I held his leg while Faseun held his hands; Taye str*ng*lated him till he d*ed. I was given his two hands and the heart. I sold one hand for N20,000 while I gave out the other hand and the heart for free,” Faseun said.

Fadare, in his own confession said he used the deceased’s head and legs for money ritual.

Man collapses after discovering that his wife is his ‘Landlord’

Young boy accused of being a witch, killing his mother and inflicting grandmother with sickness

Drama as pastor nabs his wife in bed with assistant pastor