A popular Nigerian journalist, Kemi Olunloyo has also reacted to the death of the founder and general overseer of the Synagogue Church of All Nation (SCOAN), Pastor T.B. Joshua. Pastor Temitope Balogun Joshua, popularly referred to as Pastor T.B. Joshua reportedly died yesterday, the 5th of June, 2021.

The sad news of his sudden death broke in the early hours of 6th June 2021. The news was further confirmed by his ministry via their official Facebook page. Reacting to this sad news, Kemi Olunloyo took to her Instagram page to share with people what she remembers Pastor T.B. Joshua for.

In a video shared by Kemi Olunloyo, she recounted her experience in prison. She informed that she was arrested 4 years ago over a piece of news she was working on concerning Pastor David Ibiyeomie. She was arrested as a result of that and was taken to prison in Port Harcourt.

Kemi Olunloyo revealed that while she was in prison, her mother was sourcing for people or other men of God who will intervene for her by speaking with Pastor Ibiyeomie on her behalf. Sadly, there was no one willing to take up the challenge, however, the only person who spoke on her behalf was Pastor T.B Joshua.

She noted that Pastor T.B. Joshua pleaded on her behalf, subsequently resulting in her freedom from prison. Kemi Olunloyo noted that the Pastor had instructed her to keep everything secret, that it was simply “the Lord’s doing”. However, receiving the news of his sudden demise saddened her, and she decided to share this information with the public. 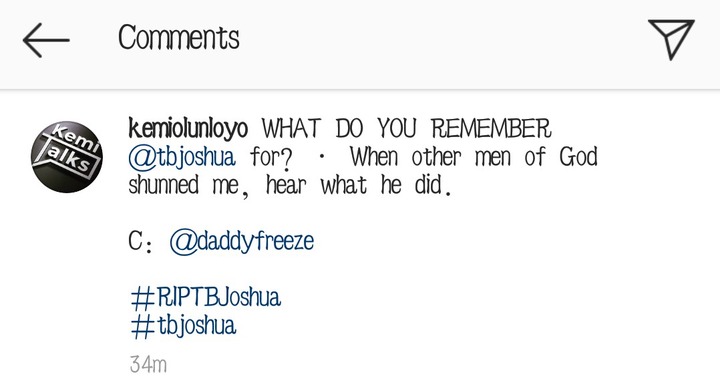 To watch the full video posted by Kemi Olunloyo, click on the link below: