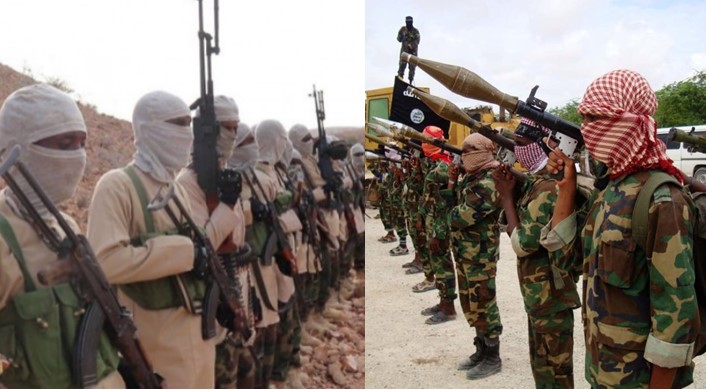 The growing insurgency in Somalia has taken a new dimension as militants have begun to turn against each other going by a recent video released from the quarters of ISIS, vowing to crush Al-Shabaab, a group which declared allegiance to Al-Qaeda in 2010.

ISIS-Somalia, an affiliate of Middle-Eastern ISIS, in the video which has gone viral apostasizes Al-Shabaab longside Al-Qaeda, declaring its determination to crush the Somalia domiciled terror group with whom it has been at constant loggerheads.

The footage shows a gun battle between two groups in Al-Miraale mountains resulting in the death of two Al-Shabaab fighters.

Also, the video captures the moment a commander of the ISIS-Somalia faction was killed in a confrontation with Al-Shabaab. The commander was identified as Daud Al-Somali aka Dujana, a fighter who defected from Al-Shabaab to ISIS-Somalia.

Abdirahman Fahiye, a commander of the Somalia faction of ISIS, who is believed to be one of the top three men in the group could be seen in the clip with his face covered, but defectors recognized his voice.

While ISIS-Somalia has limited its operations to Puntland, the terrorist group presses on its territorial expansion despite resistance from Al-Shabaab.

Al-Shabaab, few years ago vowed to destroy pro-Islamic State militants in the East African country, describing them as a disease and cancer.