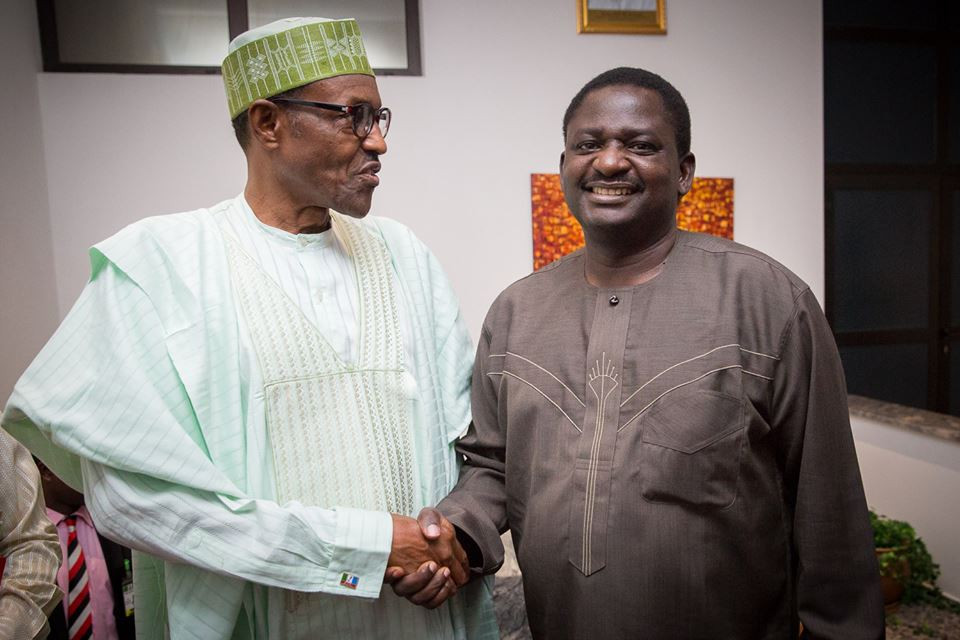 In the article, Adesina debunked claim of President Buhari being cloned in 2017, being a religious bigot, tolerating armed Fulani herdsmen because he’s Fulani and also rears cows among other things.

The article titled “IF ONLY WE KNEW THIS PRESIDENT”, reads;

Ask for a President beleaguered from all sides, and I’ll show you Muhammadu Buhari, the ramrod straight man from Daura, in Katsina State, who turns 78 today.

In the build up to the 2015 presidential election, we used to say everything had been thrown at him as projectiles, except the kitchen sink. Permit me to update that expression. Today, everything possible has been thrown at President Buhari, including the kitchen sink. Anything. Everything. Fake news. Hate speech. Lies. False propaganda. Evil thoughts. Malediction. Odium. Opprobrium. Ogbunigwe. Ogulutu.Surface to air missiles. All offensive weapons. But the man trudges on. Calmly, sedately, peacefully.

If only more Nigerians knew this President. If only they knew the essential Buhari, the quintessential patriot and gentleman, they would behave differently, handle him with more care, and show him more kindness. Yes, everyone needs kindness, even Presidents.

Remember that song by Mary Mc Kee and The Genesis?

You’ve got to try a little kindness

Just shine your light for everyone to see

And if you try a little kindness

Then you’ll overlook the blindness

Too many people have chosen to believe the wrong things about President Buhari, and have ossified their minds against the truth. But then, those of us who have had the privilege to work with him, studied and known him at close quarters, have a duty to tell what we have seen. And what better day to do it, than on his birthday.

Oh, he eats from the President. What else would he say than to sing his praises. True? False. If need be, I will serve this President for free. I consider it a great privilege to serve a man I admire. Even gratis.

Somebody commented that a blitzkrieg has been launched against Buhari and the government he leads, from all quarters. Some elements in the media, human rights groups, so-called activists, NGOs, Boko Haram, ISWAP, all at once. But is Buhari the loser? Not at all. It’s the country that ultimately loses, just as Eric Donaldson sang in ‘Little Did You Know:’

You think that you are hurting me

But little did you know you are only hurting yourself

Little did you know you are only hurting yourself.

In about two years and five months, with God being merciful as He always is, President Buhari will land safely, and retire to Daura for a well-deserved retirement at 80. And if those engineering distraction against his government continue, it is the country that would have lost. A great deal.

What are the things some people hurl against the President, which shows that they don’t know him at all?

He’s a religious bigot. Really? I’ve not seen a scintilla of evidence in the past five years. Every Christmas and Easter holiday, he calls those of us who are Christians, working with him, and asks us to stay off work, and enjoy the season with our families. That’s not the way of bigots, who would never acknowledge any religion, except their own.

As a military commander, history has it that Buhari would always give soldiers working under him time to go for worship on Sunday mornings, just as he did to the Muslims on Fridays. Yet, bigot, bigot, some people continue to shout.

He’s a Fulani, he rears cows, and all Fulani herdsmen are criminals, that’s why he tolerates them. Really? Some people even say all Fulani are herdsmen, whether they see them with cattle or not. Truth is; every ethnic stock has its deviants, its criminal elements. You can’t just demonize all Fulani, simply because you want to excoriate the President. Did he choose to be born Fulani? Did I choose to be born Yoruba, and did the Ishan, Idoma or Ijaw man choose the ethnic stock he wanted to be born into? It’s a biological accident. You have nothing to do with it. A man then doesn’t go repudiating where he comes from, simply because some people have decided to tar his people with the brush of infamy.

He’s nepotistic. A common refrain, but non-scientific. About three years ago, we did a scientific exercise. We chronicled all the appointments made by the President since 2015, and allocated them to states and regions. The result showed that the Southwest had the largest share. Followed by Imo and Kano states. Then Edo and Katsina. And on and on. But the naysayers ignored facts and figures, and stuck to their false narratives. Nepotism.

One day, the President had given me an appointment to announce in the early days of the administration. By then, some people had started talking of northernisation agenda. So I said, “Mr President, this is the murmur we hear. Why don’t you consider giving this position to another part of the country?”

He looked at me calmly, smiled, and said: “If a search has been conducted for a position, and someone has been thrown up as the best candidate. And I then bypass him because of where he comes from, or because of his religion, haven’t I been unfair to that person?”

This is Jubril from Sudan and not Muhammadu Buhari, who had died during the medical vacation in 2017, some people say. You have a clone in Aso Villa, not Buhari. Idiocy, sadly believed by even some intellectuals.

Let me tell you a story. On the day the President finally returned to the country in August 2017, after months of absence, the Chief of Defence Staff, Gen Abayomi Olonisakin, was giving out his daughter in marriage. I had attended the church service, decked unusually in complete Agbada, with cap to match. From the wedding, I went straight to the airport to join the reception party.

We formed a welcome line, as we usually do. And as the President shook each person, he had one wisecrack or the other to say. When he got to me, he took my hand and said: “Adesina, this is the best I’ve seen you dressed.” We both laughed heartily, and the television cameras captured it. I remember that many people asked me later what had tickled me and the President, that we laughed so uproariously.

Another story. The journalist Lindsay Barret had been a long time friend of the President. One day, he sent me to give his greetings. When I did, the President said: “Lindsay Barret. I remember meeting him at the war front in 1968. He was covering the war. There was a day he was almost killed in an ambush, and he then described himself as a ‘devout coward,’ who was lucky to be alive.”

Jubril of Sudan? And he remembers Barret, whom he met at the warfront in 1968? Tell it to the marines.

Ask me for a loyal man, who never forgets a good turn, and I’ll show you Muhammadu Buhari. Among the last class of Ambassadors, he had personally picked Justice George Oguntade, who was sent to United Kingdom, and Justice Sylvester Nsofor, who he deployed to America. The latter died only last week, aged 85.

How did the two men gain the favour, loyalty and respect of the President? In his many legal battles after disputed election results in 2003, and 2007, they had given dissenting judgements at both the Court of Appeal and Supreme Court, nullifying the election results, saying Candidate Buhari had been cheated. The man never forgot, and sought them out in due time. The same also happened to some of us working with him today.

A kind man. I have lots of stories to tell, but let me restrict myself to a few. In December 2015, I had lost my elder sister, a Professor of Dramatic Arts, in an auto crash. While I was crying like a wailing wailer, who was on the phone, consoling and condoling with me? Muhammadu Buhari.

And before he became President, when my mother passed on in 2013, and we had a commendation service for her in Lagos, who flew in all the way from Kaduna to attend? Muhammadu Buhari. He sat through the Christian service. Yet, they say he’s a bigot. I hear. Bigot from Sudan.

And in January 2017, I was to receive the traditional title of Nwanne di Namba of Mmaku Kingdom, in Enugu State. Courtesy demanded I tell the President. This man, who prides himself as ‘very stingy’ gave me a handsome amount of money to ferry my friends and family to the ceremony. How much? I won’t tell you, lest you ask for a belated share.

And in May 2018, I was billed for China for a 12 days course for senior government officials from Africa. He said when the journey was two days away, I should come to see him. I did. You know what he said? “Adesina, I know that you don’t have money. But you are too shy to ask.” We both laughed, and he gave me an envelope which contained foreign currency. How much? You think I’ll tell you? For where?

This President is a patriot. He loves this country dearly. A man of personal discipline. Single minded about the infrastructural development of the country. And he’s succeeding at it. I have loads of stories to tell to justify each virtue. But time and space won’t permit.

However, let me tell this final one, as told to me by a retired Colonel of the Nigerian Army.

He said he was a Major at the Second Mechanized Division, Ibadan, when the then Major General was posted there in early 1983, as General Officer Commanding.

There was a cocktail reception, billed for 8 pm. Fifteen minutes to the time, the new GOC walked briskly in. Only a sprinkle of officers had arrived. He moved round the venue, surveying the place, and at the dot of 8 pm, with the hall still scanty, he went to the gate, and directed the sergeant-major on duty to lock the inner one firmly, admitting nobody.

The GOC went back inside, held the cocktail with the few officers available. Event over, he went back to the gate, to see the battery of latecomer officers huddled there. He surveyed them, and then instructed:

All of you, see me in the office tomorrow by 8 am.

The GOC walked briskly away. And you know what? As early as 6 am next day, most of the officers had reported in his office. Once bitten, twice shy.

At 78, the President still scrupulously respects time. Do they make them like this anymore? Doubtful.

Yet, many people are plotting, and engineering all sorts of artifices, to ensure Buhari does not succeed. Who loses? The country!

There is this classic Yoruba film, Saworoide, which I watched years back. Adebayo Faleti, who wrote and starred in the film, looked at the stratagems and underhand dealings of man. And he sang, rather philosophically: Koi ye won, yio ye won lola.

It’s better for a lot more cynical Nigerians to understand this President today, rather than tomorrow, for the good of the country. That would be the best birthday gift they can give him.